When you read my editorial tomorrow where there is a discussion on ethics, you’ll be wondering if I knew anything about this story in advance. I’m a precog not a time traveller. For the record, I wrote the original editorial draft a couple weeks ago and was just finishing the final polish today.

In many respects, this story is about ethics. The Doctor wondering if he’s a good person or not. When he meets the Combined Galactic Resistence on board their hidden spaceship and persuaded at the point of a gun to repair a Dalek determined to destroy its own kind, he has to question the ethics of his worse enemy. I’m still puzzled how they let him freely walk back into the TARDIS to go to Coal Hill School on Earth and collect Clara without some military guard to ensure that he returned. That’s a serious plot logic mistake, especially as they have armed guards when they are miniaturised and sent inside the TARDIS to repair the Dalek so he can complete its own mission. Yep, ‘Doctor Who’ meets ‘Fantastic Voyage’, although they don’t get quite that small. That only happened in ‘The Invisible Enemy’ in the Tom Baker Doctor regeneration and only with his clones.

Odd reference for the observant. When Clara is a teacher, the student details on her folder is for one Gareth McCoy. What kind of significance that is is for you to decide. The Doctor is also taking the similar stance he had with Amy Pond, he only collects a companion when he needs an assistant or carer as Clara thinks she is. Surely this must make it easier for the Doctor to have all kinds of companions for different purposes than one constant one. Maybe this is a change that will happen in the future? Already, the groundwork is being levelled for Clara to have a boyfriend and her probable departure.

The use of Clara inside the Dalek is more a need for her Impossible Girl properties and changing reality by doing so. The Doctor must have seen so. There is an interesting dilemma that the Doctor lets one of his human guards die. You would have thought that he could have zapped the Dalek anti-bodies with his sonic screwdriver, at least long enough to stop them continuing to attack. These human guards are doing everything out of being scared after all.

Above are the main flaws. If you forget these, then ‘Inside The Dalek’ is actually a good story. This Doctor is more of a thinker and solver of his situations than his recent regenerations and the chase element is still vastly reduced allowed more plot. It’s interesting that Phil Ford, who has written for ‘Doctor Who’, before wasn’t flying solo but I suspect Steven Moffat was still defining what kind of Doctor he was going to have this time. It’s also interesting that this is the first Dalek to be given an individual name by the Doctor. I wonder if we’ll see a Rusty Dalek in the shops by Christmas? At least we’ve got past the colour scheme Daleks. Peter Capaldi fits the Doctor like a glove and I doubt if anyone watching will think of any of the other Doctors from his performance which is always a good sign. Jenna Coleman does a good performance to match Capaldi, no mean feat considering their age difference. Throughout her performance as Clara, she now sees herself as being on par with him and a great deal more empathy as witnessed in the school environment. She wants to help people generally.

Despite the flaws, it looks promising for next week. 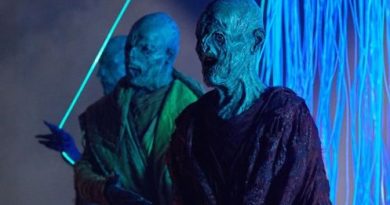 Doctor Who season 10 episode 7: The Pyramid At The End Of The World by Peter Harness and Steven Moffat. 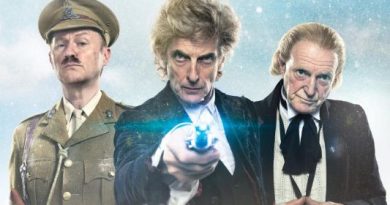 Doctor Who: The Caretaker by Gareth Roberts and Steven Moffat (Doctor Who review).