This excellent tale, ‘Fanfare For The Common Men’, written by Eddie Robson addresses a question looked at before: what might have happened without The Beatles? In a convincing drama, we see the rise of the three likeable Scousers and their music. I was so convinced they existed, I looked them up. The songs created are pastiches of The Beatles but offer a convincing argument that it is almost possible that someone other than the Fab Four could have ridden the tide of success.

As timelines are bent and warped, the Doctor makes it his business to find out what or who has broken the past. He would like to have Nyssa to help but she has vanished into history. Arriving in Hamburg on the eve of the performance that drives them to stardom, Nyssa has the opportunity to see the birth of The Common Men, if she can survive.

Another timey-wimey take on a small aspect of British and world history this story looks not only at the phenomenon that was The Beatles but also at the alternative which might have happened. How many nearly-made it bands are out there that could have pushed a memorable path through history? Circumstance and chance are interesting concepts.

This drama also ties in with previous appearances by The Common Men in other non-canon ‘Doctor Who’ adventures, making what we believe is real even more confusing to establish. It is also great fun with some amusing songs and the actors playing The Common Men reminding me very much of how The Beatles approached their own film appearances with some lovely chat in the well-remembered accents. Eddie Robson has lovingly approached this project and it has depth to its episodes that cover not only the Doctor’s point of view but also Nyssa who’s own upbringing on Traken certainly never involved boy bands.

Having just the Doctor and one companion makes a change and certainly clarifies the narrative, although the Doctor still manages to recruit another young woman to help him get closer to the Fab Three. The lads played by Mitch Benn (Mark) Andrew Knot (James) and David Dobson (Korky) throw themselves into acting and singing and the whole thing is well polished. I look forward to their album. 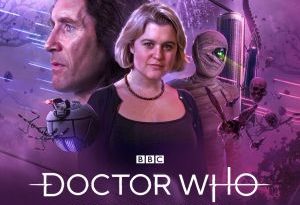