With Tegan once again dressed for work, it’s no surprise that the TARDIS is once again not on time for her shift. Her disgruntlement at the Doctor’s delight in the Edwardian fairground they have actually arrived in is somewhat ungruntled by the discovery that Houdini is appearing. Apparently she’s a fan but there’s a gypsy lady who insists on telling her fortune, which is disturbing especially when she mentions the Bay City Rollers! What the Doctor knows and the others find out is that the TARDIS has been summoned here for a reason and it’s not the doughnuts and candyfloss that are the main attractions. Here we are at number five of the series of ‘Destiny Of The Doctor’ and we are so much invested in this that we might be looking for clues where there might not be any. I blame the new series for embedding an underskirt of story arc that it wears me out looking for it. This story, ‘Smoke And Mirrors’, is a good ‘un with the more than delightful Janet Fielding doing the honours here of narrating. We also have Tim Beckmann who plays Houdini, the famous escapologist who turns out to be a previous companion on the Doctor’s adventures. With signs of Tegan softening and admitting to enjoying her journey in the TARDIS, this is a definite love letter to the classics.

As the plot develops, we get the usual problems with giving the three companions a role which so stymied the writers on the TV series but Steve Lyons has a rather cheeky diversion in mid-adventure which rather neatly ties up Adric and this adventure is nicely balanced over the four protagonists overall. My conclusion is that it would stand up well as a classic ‘Doctor Who’ and offers a lot more than many of the recent bangs and flashy stuff. 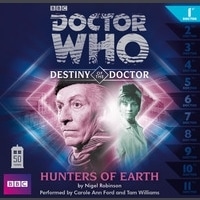 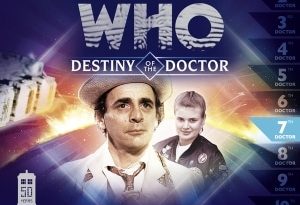 Doctor Who: Destiny Of The Doctor: Shockwave by James Swallow (CD review).

Doctor Who: Destiny Of The Doctor 4: Babblesphere by Jonathan Morris (CD audio review).

Doctor Who: Destiny Of The Doctor: Shockwave by James Swallow (CD review).