Type ‘Doctor Who Deep Breath review’ into Google and it currently has 138,000 results. By the time you read this the number will likely be more. Reviews began popping-up once the leaked unfinished version appeared online ready to download. This isn’t the only review on this site, if you’d like a spoiler-free review then I suggest you check out Geoff’s excellent piece here (http://sfcrowsnest.info/doctor-who-deep-breath-by-steven-moffat-tv-review/). If you can, however, read some more thoughts about Peter Capaldi’s debut story then by all means read on. Spoilers are a given!!

Firstly, a word about where I watched the episode. I was lucky enough to get tickets via my friend for the premiere in Leicester Square, complete with Strax’s warm-up video about each of the Doctor’s lives and then, following the episode, a Q&A session with Peter Capaldi, Jenna Coleman and Steven Moffat. This was the culmination of the world tour that had seen the team travel to the USA, Brazil, South Korea and Australia in ten days. The pictures shown to the audience prior to the screening showed just how popular the show has become. Considering Capaldi had only uttered a few lines of dialogue in the role, the hunger to see the new Doctor was immense. The Q&A itself was conducted in a typically guarded fashion by the team, as Zoe Ball, rehired from presenting the Capaldi-reveal show fielded audience questions. These came from cinemas up and down the country, as the Q&A was broadcast to these, too. Returning monsters were discussed, Capaldi kept mentioning the ‘Mondasians’, though, rightly, Moffat wants him to clarify what he means. The two leads also discussed their first scene they shot together, which was coincidentally the Doctor’s arrival on the banks of the Thames, crammed into the prop TARDIS with a bloke holding a smoke machine. Nothing much was revealed about the future, as Moffat put it, ‘If you want to know what happens in ‘Doctor Who’, watch ‘Doctor Who’.’ Also presented was BBC iPlayer’s latest show ‘Doctor Who Extra’, a shorter version of the axed ‘Doctor Who Confidential’ focusing on the making of ‘Deep Breath’ and the arrival of the new Doctor.

‘Deep Breath’ is an impressively directed, well-written and performed opening story for series 8 of ‘Doctor Who’. It marks a determined change of pace in the usual presentation of stories, though this could be down to its generous 80-minute running time. It is a special occasion though as Peter Capaldi takes control of the TARDIS as the new Doctor, alongside existing companion Jenna Coleman as Clara. The Paternoster Gang also return: Madam Vastra, Silurian Adventuress, her wife and maid Jenny and butler/strong-arm Strax, a Sontaran. As before, the Paternoster Gang offered some great comic relief, Strax’s hurling of a newspaper at Clara’s face and Jenny’s griping that the ‘pretence’ of them being lady and maid in public is basically the same at home. It’s a technique purloined from earlier stories, easing the audience into a new Doctor by surrounding him with familiar faces.

For many viewers, they will have needed some easing. Peter Capaldi is far older than his predecessor or, in fact any of the previous Doctors since William Hartnell. He is striking, hawk-like nose and staring eyes, more watery, thinner. The eyebrows, rather like Matt Smith’s chin, get their own dialogue and allow Moffat to reference the forthcoming Scottish independence referendum. With most post-regeneration Doctors, it’s difficult to tell what sort of performance viewers will see later in the series. His addled and threatening scene with the tramp, ably played by the late Lis Sladen’s husband, Brian Miller, showed his ability to turn his performance on a dime and surprise the viewer. Then Capaldi’s composed confrontation with the Half-Face Man and subsequent adorable yet awkward befriending of Clara does promise much. Similarly, Jenna Coleman’s confused, afraid, but brave performance is one of the episode’s highlights. She demonstrates a maturity in this episode that was previously missing. That she can hold her own against Capaldi’s taller, over-powering Doctor recalls Tom Baker and Lis Sladen’s pairing. The scene between the pair in the restaurant and then the dungeon illustrate the similarities.

There are plenty of visual references to the past of ‘Doctor Who’ in the episode. The Doctor pulls the face off the waiter in a similar fashion to the face falling off Sarah-Jane’s duplicate in ‘The Android Invasion’. The T-Rex on the Thames recalls ‘Invasion Of The Dinosaurs’, ‘Terror Of The Zygons’ and the confused history-all-at-once of ‘The Wedding Of River Song’. The Rex is incidentally about double the size of skeletons that have been found, hence Jenny’s confusion at the size. Of course, it looks better on London’s skyline being that big, ambling about by Westminster, though when it is killed it falls near ‘Phoenix Wharf’ which is situated by St Katharine’s Dock in Wapping so the creature is allowed to wander quite a way down the Thames. The dinosaur in London also recalls Conan Doyle’s ‘The Lost World’ when a pterodactyl escapes in the city. This isn’t the only Conan Doyle reference, ‘The Conk-Singleton Papers’ is a piece of early Holmes fan fiction by John Dickson Carr. The reference to the ‘Camberwell Child Poisoner’ is from the Holmes story ‘The Five Orange Pips’. The restaurant is very similar to ‘Sweeney Todd, The Demon Barber Of Fleet Street’, a similarity the Doctor himself picks-up on. The spontaneous combustion idea could come from a few documented cases in London’s past, but the most famous case of it occurring was entirely fictitious: the combustion of Mr. Krook in Dickens’ ‘Bleak House’. Simon Callow however does not appear in this episode.

The non-regular cast is quite sparse, though Peter Ferdinando steals the show with his performance as the Half-Face Man. Having previously worked on director Ben Wheatley’s hypnotic ‘A Field In England’, Ferdinando’s menacing turn surprisingly gives way to disbelief and you almost feel sympathy for his plight. Did he fall or was he pushed? Well, the Doctor points out he has more human in him than robot, so I think it’s fairly clear that Half-Face Man commits suicide. Wheatley, Capaldi and Moffat should all be congratulated for planting the seeds of doubt. Usually, the Doctor’s favoured method of murder isn’t pushing people out of balloons, but explosions, however Capaldi’s glance to camera (breaking the fourth wall, more Tom Baker) brings goose-bumps. There are many neat visual touches Wheatley brings to the episode, the stand-out moment being Clara’s oxygen-starved trip down the corridors of the ‘larder’ and subsequent teaching flashback. A good job she chose that memory to latch on to at the time though. Also consider a lovely shot of the lamplighter igniting the gas flames on London’s streets as Alf (actor Tony Way) observes the dinosaur and how it later is played back as Half-Face Man’s flamethrower hand. The episode also presents its own, completely golden episode cliff-hanger, as Clara, abandoned by the Doctor as the clockwork robots come to life, remembers the Doctor’s words ‘How long can you hold your breath?’ and as she does just that the music swells and I easily imagined the theme music kicking-in.

Given the usual budget limitations of ‘Doctor Who’, the episode makes a good go at presenting Cardiff as Victorian London again, although the story doesn’t make it exactly clear when exactly it takes place. The paper that the Doctor picks up in the alley to read about Margaret Roberts’ spontaneous combustion (the maiden name of former Prime Minister Margaret Thatcher, is Moffat really making anti-Thatcher jokes still?) states in its other columns that the opening of the Swiss National Museum has taken place. This occurred in 1898. Further corroboration for this date is found in the small ads that Clara shows Madam Vastra. An advert detailing a showing of the painting ‘Ecce Homo’ by Munkacsy is listed and this was exhibited in 1898 in London. Also, other ads on that page show performances by Adelina Patti, a famous opera singer at the time, performing at the Royal Albert Hall which she did regularly during the 1890s. The dates on the ads suggest it is also July. Everyone looks a bit wrapped-up for July 1898, don’t they?

Finally, the episode reminds us that ‘Doctor Who’ is still ready to tug the emotional heart-strings was the reappearance of Matt Smith. I had no idea he was in the episode (though plenty of people did, I understand) but his speech about getting Clara to help him was lovely. Again, Coleman reacts wonderfully and it was a lovely way of rounding off the Eleventh Doctor era, especially considering the shocking way that the Twelfth Doctor (I’m happy with ‘Twelfth’ if you are) popped into the console room. The Doctor now seems keen to rectify some of the mistakes he’s made in the past. How this will play out across the rest of the series remains to be seen, however ‘Deep Breath’ feels its own statement of intent so keenly, that it would be a shame if the series does not deliver on this promise. The episode’s coda introduces us to ‘Missy’, an umbrella twirling, Mary Poppins figure who wears a spiked, fetish bracelet on her left hand and remarks that she might keep her boyfriend’s new accent (unless the ‘it’ refers to the Doctor himself). Is she peddling an illusion of heaven to the Half-Face Man? Is Missy short for Mistress – a female Master? Could it be Romana, K9 called her Mistress after all and maybe she’s ‘Miss-E’ as in ‘Miss E-Space’? The speculation should keep the forums going for another few weeks, unless of course more scripts leak.

I haven’t talked about the new TARDIS design, music or opening sequence. I think, as I’ve got older, these elements have become less and less important. They all contain the same groundbreaking tricks that the series developed in 1963 and they still work. I don’t really have an opinion on the nuances involved anymore. Yes, the dinosaur, the spontaneous combustion and ‘Sweeney Todd’ elements don’t really gel, like three fantastical elements of Victorian London thrown together in hoping one of them sticks (overall, I think the dinosaur wins), but it is hard to deny the compelling change in the Doctor and Capaldi’s performance, enhanced by Coleman’s excellent turn. Based on this alone the series has bounced out of being fifty and discovered a whole new life. ‘Here we go again’ indeed. 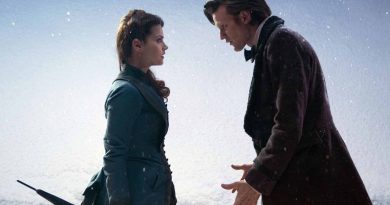 Doctor Who… with bells and rings on.