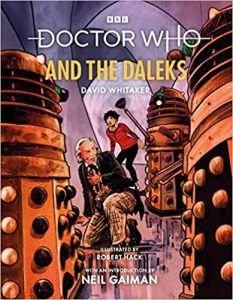 This is a new edition of a novel that was the first to be issued and reissued in hardback and Armada paperback. It also helped launch the Target imprint in 1973. It has already done some heavy lifting for generations of fans. This version is a large format hardback with colour illustrations.

It is night and Ian is parked on Barnes Common as fog has rolled in. He ponders whether he should walk home but spots a pale young woman who explains she has been in an accident and he needs to help ‘Susan’. The crash has involved a lorry and its driver is dead. ‘Susan’ is missing, so the pair look for her only to encounter a silver-haired man who seems anxious to be rid of them. Ian is relieved to find a police box and steps inside to make a call.

The next day they meet the Daleks and the rest, as they say, is history. This novel is quite different from the original TV series as was intended as a one-off so it took the most dramatic storyline from the first episodes and gave the Daleks immortality alongside one of the most iconic yet unlikely heroes.

The opening to this story told from the point of view of Ian is atmospheric. Barnes Common is well-known to London dwellers and there must have been many a school boy or girl who longed to take the London overground to see where this story is set. Here Ian does not yet know Barbara or Susan. He works at Coal Hill School and is obviously unhappy there. Barbara has been tutoring the extraordinary Susan and already finds her knowledge and sometimes lack of it strange and unusual. Susan is protective of her gruff grandfather. Both the teachers are effectively untethered and it is only a matter of time before they move. The decision is taken from them as both are unconscious when the Doctor makes the decision to leave the planet to avoid detection. They have no choice about their abduction and this definitely does not sit well in our opinion of the Doctor.

The first person narration in the novel has depth and purpose giving us Ian’s first impressions, his confusion at events outside his comprehension, his delight when the Doctor smiles at him and his worries slip away. This is a book that seeks to give a complete picture of the Doctor and his companions where we are readers can become immersed in it much like we do when it is on the screen. Neil Gaiman notes that if home video had been invented already we would have missed all this. Maybe a nation of readers would never have developed, not forgetting that some like Gaiman and Moffat went on to have a serious input into the on-going series.

What is noticeable in this novel is the romance in the TARDIS is no new thing and the growing relationship between Ian and Barbara is dealt with delicately and is sweetly full of misunderstandings and defensive behaviour. As the only humans on board, they would naturally be allies and each plays to their strengths.

The illustrations are very attractive and based on the TV characters looks, of course. The colours are lush and Robert Hack is a well-known illustrator of various graphic novels including ‘Doctor Who’. Original readers of the novel would have loved this version although it would not have been a pocket money price like the Armada or Target versions.

‘Doctor Who And The Daleks’ is a treat book even if you already have it in another format. It is pure joy and a celebration in the 60th year of its incarnation to be added to the shelves. 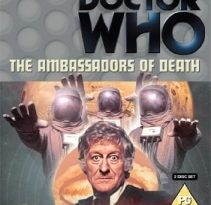 Doctor Who: The Ambassadors Of Death by David Whitaker (DVD review). 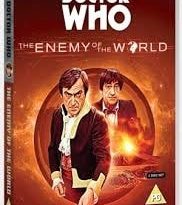 Doctor Who: The Enemy Of The World by David Whitaker (DVD review). 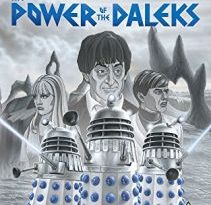 Doctor Who: The Power Of The Daleks by David Whitaker (DVD TV series review).

Doctor Who: The Ambassadors Of Death by David Whitaker (DVD review).

Doctor Who: The Enemy Of The World by David Whitaker (DVD review).