‘Doctor Tripps: Kaiju Cocktail’ is a short steampunk adventure novel with more than a hint of comedy about it as you can see by the picture of the eponymous villain on the cover with his brain on view. Here’s the setup. 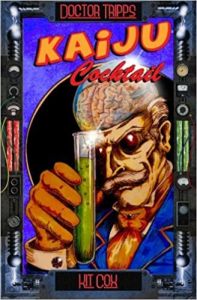 Doctor Tripps leaves his home base on Limehouse docks, London and sets off in a colossal airship taking all his staff with him. Most of them are Largely Universal Monkey Personnel or LUMPs, but there are a few special servants. Igor is a mermaid woman with colour-changing hair evolved from some sea creature. Flyn is a flybrid, a monkey with the head of a fly and small wings. As the new century begins and the old Queen dead, Tripps can see that the world is on the brink of war, one to be fought with new weapons. A strong supporter of lovely clean steam power who hates dirty diesel, Tripps plans to wipe out the latest technology by launching a world war from his new base in the volcanic clouds above Hawaii.

Rudolph Diesel, on the other hand, favours the engines that bear his name. He has Diesel Base 1, a vast undersea dome supported on six hydraulic legs where he develops new weapons using his own technology. The stage is set for a clash of titans.

Tripps starts the ball rolling with his latest dastardly invention. The Kaiju Cocktail is a vivid, translucent green concoction designed to affect both humans and animals. Kaiju is Japanese for ‘strange beast’. The first creature affected becomes…Sheepzilla! A thirty foot tall monster that develops a taste for human flesh it is regrettably stupid but accidentally moves the plan forward when it attacks a train near Sarajevo.

Tripps next two creations are also thirty feet tall but based on a bear and a mule. The Russian bear is a familiar concept but, oddly, the bear-thing sent to attack Russian is supposed to represent Germany and the mule-creature defending them is on the side of the Tsar. Their battle is meant to start a war between these two powerful nations.

In war, lesser persons can also take on important roles. Iron is nearly sixteen, an adopted son of British Lord Branding, who is in the Order of the Dragon. When the call comes to defend the Empire, his Lordship sends Iron in his place. Due to a mix-up in a Berlin hotel, Iron gets a metal suit that makes him powerful enough to fight monsters.

Meanwhile, in London, Beatrix Honey, a highly competent agent of NANI, the National Army of Nursery Intelligence, is sent to Moscow to look after and protect the children of the Tsar. There she encounters an unusual monk named Rasputin, Kaiju monsters and a hero in an iron suit.

Influenced by icons of British cultural history such as Hammer Horror and ‘Carry On’ films, author Kit Cox puts together an entertaining romp that will pleasantly fill a few idle hours. There’s plenty of invention and wit herein. He writes lucidly in the pulp style and has a visual imagination. I’d love to see a graphic novel adaptation by that crowd at ‘2000AD’ or even a live-action film. They can do anything with CGI nowadays. One would hope for a UK production because it’s all very British and will often twist your stiff upper lip into a smile.