a short story by: GF Willmetts

It’s often said that you should beware strangers bearing gifts but the signal from the alien starship passing this way was too good to resist. It wasn’t going to stop, just drop off some non-atomic materials like it had a millennia ago and it wasn’t an invasion. Nice of them to tell us but we also suspected that just because they could receive our media broadcasts that it was an automated reply. They were going to do it anyway.

Not that made any difference. The scientists had gone ape shit over the word ‘materials’. It would explain some anomalies about the amount of rare metals on terra firma that enabled a lot of the high-tech we have today. Hell, it might help resolve all kinds of things in our pre-history.

Even if it didn’t, getting the leftovers from an advanced alien species might also enable our own dreams to reach for the stars. A lucky dip that was worth taking. Whatever. It wasn’t like we could refuse. We were told the intentions. Love it or lump it. They even told where just to prevent anyone being naïve enough to think whatever they were dropping off wouldn’t drop on their heads.

The usual protest marches happened across the world for all the good that they would do. It was hardly like it would change anything. For good or bad, the starship was slowing down past Mars now. The scientists had figured out the trajectory and how it would use the sun to accelerate again. It seemed it was going to skim the Earth’s atmosphere and unless they’d mastered teleportation, whatever they were going to drop would have to be at the lowest point before it accelerated away again. It seems like whatever telemetry they were using, it had chosen a rocky atoll devoid of life. That alone meant that they must be at least conservation of life conscious although some did wonder what happened to the last deposits they left here.

From a political POV, it was in international waters. It could belong to whoever got there first and put a flag on it. You could feel the warships getting ready to be sent on their way.

Well, it would have except the secretary general at the United Nations said it would be fairer for all that the atoll would be divided into random lots so every country could have a share. If a third world country chose to share their lot with the more technically advanced then that was off their own back. You could already see some political wrangling in the background which would benefit the poorer third world countries. It was all going to be guesswork until the starship dropped off its load. One could only hope that no technology would cross between lots and that promises of co-operation should that happen be fulfilled.

There was a wad of quick books and Net blogs speculating that this was a test by the aliens to see just how advanced we truly were before being let into some galactic league and that we shouldn’t blow it. War was to be avoided at all costs. They might be watching. The long deceleration gave us all time to think until D-Day happened. ‘D’ for deposit or delivery. They weren’t sure which. One could only hope that they’d give us a decent set of keys to open the boxes or at least a technical manual we could read or have better picture instructions better than our own manuals.

The starship’s approach was watched by a variety of satellites on its final approach. Science Fiction readers would call it a big dumb object. It was truly huge. Apart from the message of delivery, it has been quite ever since. Apart from being huge, just how dumb had to be decided. There was no idea whether it was manned, let alone with what. I doubt if we would see them anyway.

The world reached a silence as the starship skimmed into the atmosphere. Mostly because no one had figured that with its enormous size that it would look like a lunar eclipse as it blotted out the sun for a brief few minutes as it circled within the atmosphere. A cold chill in our hearts and then suddenly it was gone and the media turned to the atoll, experts at the ready.

The satellite cameras focused on where the starship was going, everyone on Earth wondered what it had left. They didn’t have to wait for long. The smell spread in the atmosphere left no one in doubt that these aliens had used the Earth as a place to leave their shit and hadn’t even bagged it. The aliens had left enough to not only cover this atoll but high enough to be considered a small mountain. Plenty of shit for everyone. Maybe there were live people on that starship and had just finished recycling as much as they could. We should have been grateful that they hadn’t decided to use our planet for fresh supplies, although maybe they didn’t think we had enough of what they needed, especially the rarer elements. Maybe that’s why we had so few of them.

Eventually, the smell faded or we got used to it and a few brave scientists landed and collected samples. No one country was that interested in claiming their allocated shares for some reason. Analysis showed there were similarities to terrestrial shit so the microbes weren’t that much different from our own and wouldn’t kill us. A small favour.

In fact, the scientists went one step further. There was enough DNA pointers to say that we shared more than a little in common with these aliens and that we were the bi-product of their last shit run. It brought a whole new dimension to being ape shit after all.

I looked up at the stars and wondered. Just how many other planets had these aliens left their bodily waste and had they realised that sentient life owed itself to their shit. It put the universe into a different perspective. Out entire animal kingdom was just a waste product. That really put everything into perspective and for me, the universe had made us a lot smaller and smellier.

but I couldn’t use that as a title. 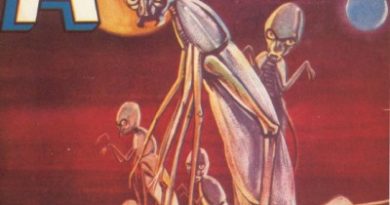 You Won’t Believe A Man Can… a short story by: GF Willmetts.

You Won’t Believe A Man Can… a short story by: GF Willmetts.