‘Swimming In Blood’ is a collection of adventures featuring Devlin Waugh, an exorcist and assassin working for the Vatican in the era of Judge Dredd. He is a muscular, sadistic, tea drinking Olympic flower arranging champion who prefers the company of young men. The title story, ‘Swimming In Blood’, was my introduction to Devlin and I wasn’t hugely impressed. It was a routine ‘2000AD’ adventure, heavy on gore and violence. As ever with material from that source, there was a degree of invention. Aquatraz was the popular name for an undersea prison in the Bahamas to which Waugh is sent when it is taken over by vampires. He beats them but gets turned into a vampire himself and decides to retire. The story by John Smith was okay, not great, and the art was likewise, marred by the appearance of being filmed through a dirty milk bottle. This was apparently the fault of some problems in reproducing Sean Phillips’ original paintings. Happily, it got better. ‘Brief Encounter’ is entertaining. Devlin goes to Mega-City One and is stopped at customs because his luggage contains tobacco, alcohol and several other illicit items, including blood. Dredd can’t touch Waugh because he has diplomatic immunity but finds a way to get at him even so. This was more promising.

Next is a prologue for ‘Chasing Herod’ in which a paparazzi tells us a bit about Devlin’s history before revealing that ‘something’ is coming to the world and there is no one to save us. Cue Devlin Waugh, coming out of retirement when the skull of the Herod is stolen from the vaults of the Vatican. The skull of the Herod! It was stolen by the Fakir, recruited by Lady Fading Light, who then has an auction attended by four-armed oriental fiend Harry Kiri and other evildoers. ‘Chasing Herod’ benefits from a sharper script with more wit and less bloodletting and very neat art from Steve Yeowell with colours by D’Israeli. The former Tory Prime Minister must be a vampire. too, as he’s still around and working in the comic book industry. He used to be a writer, you know.

‘Chasing Herod’ is followed by several other episodes but it’s all part of the same apocalyptic story about which it would be unfair to reveal more, except to say that it’s very good. Devlin Waugh is assisted by various other characters and the interesting cast makes for a much livelier narrative. Waugh is a cross between John Rambo and Oscar Wilde which is okay for a few laughs but you need more to make a substantial story. You get more here.

The book tails off with ‘A Mouthful Of Dust’ in which Waugh helps an old friend try to find a cure for a demonic disease and ‘A Love Like Blood’ which is a text story about a fan obsessed with Devlin. Both are okay but it’s the ‘Herod’ saga that makes the book.

As there are a few collections of Waugh out there it’s worth summarising the contents so the buyer doesn’t inadvertently duplicate unnecessarily. This one contains ‘Swimming In Blood’, ‘Brief Encounter’ ‘Chasing Herod’ ‘Reign Of Frogs’ ‘Sirius Rising’ ‘A Mouthful Of Dust’ and the text story ‘A Love Like Blood’. That seems to be all the Waugh stories extant except ‘Red Tide’. Shop carefully to maximise your value. 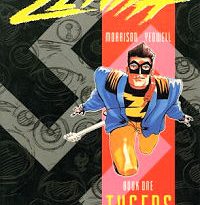 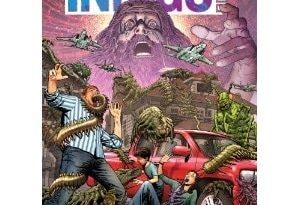