As the daughter of a “highly theatrical family” in NYC, we hear about Nana’s early years. Why she loves her hair, where the term “Visitor” originated from, how she skipped Princeton to dance as a chorus girl, and how much she enjoyed portraying Kira. She is writing a book on Trekkie ladies. She is clearly enjoying her life. Has a new pot for wash.

Kira Nerys is a complex and dynamic character from the American science fiction television series Star Trek: Deep Space Nine. She is played by actress Nana Visitor and is from the planet Bajor, which has recently emerged from a brutal foreign occupation. As a member of the resistance, the decades-long conflict has left her tough and uncompromising, but she is sustained by her strong faith in traditional Bajoran religion.

Kira’s backstory states that she was born in 2343 in Dakhur province, Bajor, during the 50-year Cardassian occupation of the planet. She was raised in a labor camp and her family were members of the artisan caste, namely sculptors of clay or potters. At age 13, Kira was recruited into the Shakaar resistance cell, part of an underground movement which carried out guerrilla attacks against Cardassian military and civilians with the ultimate goal of ending the occupation.

Kira is assigned as the senior Bajoran Militia officer aboard Deep Space Nine (DS9), acting as the station’s executive officer under the Starfleet Commander Benjamin Sisko, who commands the facility. Initially, Kira is opposed to the Federation presence on DS9, feeling that the Bajoran people should have nothing to do with the Federation, as she believes that Bajor needs to be able to stand on its own two feet after enduring a long, brutal occupation by the Cardassians. Over time, her sentiments change and she becomes one of the strongest supporters of Bajor joining the Federation, and is a steadfast ally and friend of Sisko.

As a member of the Bajoran Militia, Kira is an invaluable help to Starfleet in its mission on DS9. She often commands Starfleet personnel as DS9’s executive officer. In the third season, she also serves as the first officer of the Defiant, a Starfleet warship based at DS9. She plays a significant role in helping the Cardassian Resistance wage a guerrilla war against the Dominion, being sent by Sisko to Cardassia itself to teach Damar and his followers the tactics she learned during the Cardassian occupation of Bajor. 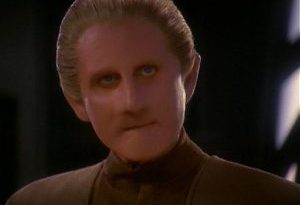