This graphic novel brings together the first six ‘Death Sentence’ comics with additional bonus content. The six part comic series was published monthly starting in October 2013 with issue six appearing in March 2014 and was created by Monty Nero and Mike Dowling. ‘Death Sentence’ introduces us to a world where people infected with the sexually transmitted G+ virus develop strange powers. The downside is that they will die six months after the powers develop. There is currently no cure and no treatment hence ‘Death Sentence’ is a rather fitting title. A word of caution here as this novel is most certainly aimed at a mature audience and not, as the small text on the back of the cover says, ‘Suggested for mature readers’. One of the main characters is a singer so we have everything you would expect with rock and roll, namely sex, drugs, violence, bad language and a very questionable wardrobe. All of this is wonderfully depicted in explicit detail by Mike Dowling.

Back to the story, which is primarily set in London. It would appear that those unfortunate to contract the G+ virus develop strange powers but some people are far more powerful than others. The story starts with Ms. Verity Fette who’s just about to learn she has the G+ virus and takes it rather badly. At the other end of the spectrum is Danny Waissel, better known as the rock star Weasel who, when he’s compos mentis (which isn’t often), seems rather indifferent to having the virus. The third character with the virus is the comedian David P. ‘Monty’ Montgomery, who is further along the development curve than the others. He has been using his powers to wow audiences but is ready to take things to the next level and that’s nothing to laugh about, let me tell you.

A staple ingredient for these types of stories is, of course, the shadowy government/military department and in this case it’s the UK’s very own Department of National Security. They appear to be well-equipped but, as expected, rather inept. I don’t suppose many of the DNS foot soldiers get to pick up long service awards. However, NDS picks up Fette and Weasel and transfers them to a secret research centre on an island in the North Atlantic. Here they begin their training to develop and refine their emerging powers. Monty, on the other hand, slips through the net due to bureaucratic mistakes and take a different approach to developing his powers.

I don’t want to go further into the plot as it would necessitate spoilers and this novel should be savoured on a first read. This is a wonderfully presented novel with Dowling’s artwork adding to the ambiance of Nero’s dark and violent story. Included in this novel is an introduction by Monty Nero describing how ‘Death Sentence’ came about. The accomplished writer Rob Williams has also penned an introduction that’s worth reading. Each comic is presented as a chapter which begins with the original full page cover so we’re not losing anything by buying the collection. In fact, after the story ends, there is a gallery of variant covers followed by a story commentary, which takes the form of a discussion between Monty Nero and Mike Dowdling as they analyse all six comics. This is a detailed and fascinating analysis that runs for 25 pages with a liberal helping of chosen panels from the comics. In fact, I’d go so far to say that it’s a fascinating read in its own right.

If you have bought the original comics, I would recommend buying this collection as it’s worth it to get the additional content and for the very high production quality of this hardback. Even the quality of the glossy pages feels expensive. For those who have not read the comics, you should treat yourself and buy this. ‘Death Sentence’ is top quality British adult comic material with the potential to be a long running series with a never ending supply of new G+ virus characters. But don’t get attached to these characters as they only have six months to live. 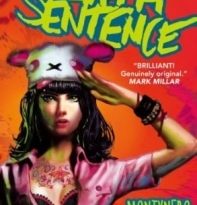