I have made mention before of the state of the modern super-hero film. They’re bold. They’re epic. They’re unafraid to deal with important themes and they can all get a bit po-faced and serious. Most DC Comics films probably have the art department spend most of their money on various shades of the colour black. Even the Marvel Cinematic Universe, which at least gives us some light touches in the likes of ‘Guardians Of The Galaxy’ and ‘Ant-Man’, is heading down a more ominous route with ‘The Infinity War’ on the horizon. So along comes Deadpool and it feels like a breath of fresh air. Here is a super-hero movie that isn’t prepared to take itself remotely seriously. Hell, it tells you that right from the very beginning. Instead of simple names, the opening credits inform us that what we’re about to see is ‘Some Douchebag’s Film’ starring ‘An Overpaid Tool’ and ‘A British Villain’. If you want angst, battle scenes that try to make World War II look like a scrap between a gang of schoolboys and enough grit to keep Canada supplied over a particular snowy winter then go and speak to Zack Snyder. If you want to see something with lots of childish swearing, ridiculously over the top violence and enough genitalia references to make a gynaecologist blush then ‘Deadpool’ should more than hit the spot.

Deadpool started life as a fairly minor character in the Marvel Comic Universe. But he started to gain a massive cult following thanks to his witty banter as he’s known as the ‘Merc With A Mouth’ and his consistent breaking of the fourth wall. So when the character was portrayed by Ryan Reynolds in ‘X-Men Origins: Wolverine’, the studios did their usual bang-up in appealing to fandom by sewing his mouth shut and taking away everything that people liked about him in the first place, something that this version of Deadpool has a lot of fun making fun of. Noted comics fan Reynolds longed to bring the true character to the big screen and, after CGI Test Footage was ‘leaked’, fan demand was such that that Deadpool was given his own movie with mouth thankfully in full working order.

‘Deadpool’ is a film that many have pushed as being subversive. However, this is not really the case. For all its breaking of traditional narrative rules, talking direct to camera and the audience for example, the story is a fairly typical origin story. Wade Wilson (Reynolds) is a mercenary for hire, putting the frighteners on anyone who needs to be put in their place. He meets the beautiful Vanessa (Morena Baccarin) and they look forward to a long life with each other. Sadly for Wade, cancer comes along to screw up everything and, desperate to try anything, he finds himself in a mysterious programme designed to kick-start people’s latent mutant genes. Unsurprisingly, the programme turns out not to be exactly as benevolent as everyone first thought and Wade soon finds himself looking like a pickled conker. Thankfully, he also has invulnerability. Taking the name Deadpool, Wade now must make the people responsible pay for their crimes, get back with Vanessa and perhaps spend a little quality time with the stuffed unicorn wearing chaps.

The beats of the film are indeed that of your typical super-hero epic, though the film also tries to push the love story between Vanessa and Wade as the main story arc. It’s the sheer irreverence with which everything is treated that makes it stand out, consistently ‘lampshading’ everything that is going on. At one point, Deadpool is told he is going to be taken to Professor X. ‘Which one?’ he groggily replies, ‘McAvoy or Stewart?’ There’s just a sense of glee with everything. Of course, the endless masturbation jokes and gratuitous swearing do start to become a little tiresome but, within the constraints of the super-hero genre, also feel rather liberating.

Indeed, the genre does come in for much skewering. The character of Colossus (Stefan Kapicic) is the traditional, clean-cut super-hero with strictly defined morals and a puritan attitude. Placed into sharp relief against Deadpool’s anarchy, he’s shown as a faintly absurd character. His companion Negasoinc Teenage Warhead (Brianna Hildebrand) is the bridge between the two, a surly teenager who texts before entering a fight and also provides some good material for Deadpool to bounce off.

The driving force behind the film, both on and off screen, is Ryan Reynolds. He is clearly having the time of his life portraying Deadpool, firing off the quips with a manic energy and frequently having a blast making fun of himself. ‘You think Ryan Reynolds got by on acting ability?’ muses Deadpool at one point. He still manages to provide a few more serious moments and creates a somewhat sympathetic character that is deeper than jokes, violence and crudity. He still is the most fun with the aforementioned jokes, violence and crudity.

He’s ably abetted by TJ Miller as Weasel, a cruelly sardonic bartender who has a fine line in insensitive jokes while Baccarin does the best with what she has but, as in par for the course for love interests, she still feels somewhat idealised as opposed to a fully rounded character. The villains, Ajax (Ed Skrein) and Angel Dust (Gina Carano), are also fine if rather one note.

Aesthetically, the film feels slightly different to its cousins in the DC and Marvel universe. This is partly budgetary. As revealed in the commentary, the opening half of the film sees flashbacks interspersed along the freeway battle simply because they couldn’t afford a number of different fight sequences. Similarly, there’s no scenes full of thousands of extras. It gives the film more of an intimate and spare feel and is somewhat refreshing for the genre. Helmer Tim Miller is a competent director of action as well managing to keep the pace going with a lightness of touch.

The Blu-ray itself has a fun bunch of extras, the best of which is entitled ‘Deadpool’s Fun Sack’. This is a collection of all the trailers, internet viral spots and PSAs made for the movie. It’s a really mixed bag of the sublime and the ridiculous from numerous trailers to Deadpool’s guide for checking for testicular cancer. There’s also a special greeting from Deadpool for Australia Day which ultimately means lots of jokes at the expense of Hugh Jackman.

There’s an OK gag reel, and featurette entitled ‘From Comics To Screen…To Screen’ which is your typical promotional piece on the making of the film. The deleted and extended scenes don’t really contain much of significance, though there are some fun extra exchanges between Colossus and Deadpool on the freeway sequence.

The commentary with Tim Miller and Deadpool co-creator and comics artist Rob Liefeld is rather dry but has a few interest comments of the practicalities on the making of the film. More fun is the one with Reynolds and screenwriters Rhett Reese and Paul Wernick. There’s some easy banter between the three and a hilarious discussion about the identity behind those who leaked the test CGI footage that led to the film being made in the first place.

Super-hero stories can be deep, adult and complex and it’s easy to forget that we also like them because they’re fun, silly and entertaining. ‘Deadpool’ reminds us that sometimes we’re allowed to have fun with the ridiculous world of men, women and aliens in spandex suits. While it is perhaps not as subversive and groundbreaking as it would like to be, it’s sense of mischief is hard to beat. With some worthwhile extras on the Blu-ray, it’s a very worthy purchase for super-hero fans and those who want their blockbusters to be just a little different. 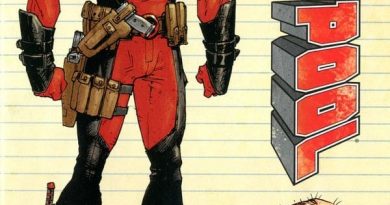 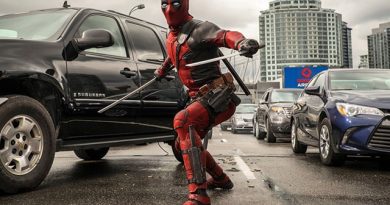 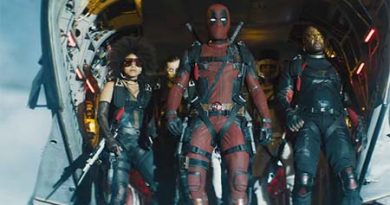