‘Darkwitch Rising’ is the third title in Sara Douglass’ ‘The Troy Game’ series and is an historical fantasy series of love and revenge across time set in Britain and especially London. I have, unfortunately, previously just read ‘Druid’s Sword’, the next and final book in this series which ties up all the loose ends and I would strongly recommend that those interested in these type of books read this series in order. The background to the series starts in the mists of time when Brutus, last of the Trojan kings, who had acquired the knowledge of how to construct a magical Labyrinth, like that of Knossos in Crete, is aided by a seductive sorceress Genvissa and, together, they almost succeeded in creating their Labyrinth. However, their plans were thwarted by Brutus’ wife, Cornelia, who partly from her jealousy and fear of the danger their attempt at rivalling the gods would create, stabbed the sorceress. Her violence actions however trapped them all into a endless cycle of death and rebirth until the magic of the Labyrinth is completed.

Time passes. They return repeatedly to battle each other again and again. In book 2, ‘God’s Concubine’, for example, set at the time of the Norman Invasion of 1066, some of them are historic characters of the period. In that example, William the Conqueror is one of them. Though some of the participants have come close to victory each time, there is some new element which foils the creation of this ultimate power.

The era ‘Darkwitch Rising’ is set in is like the rest, in a time of change and war. The English have been at war again, but not with a species of rascally foreigner but amongst themselves. The great Civil War between King and Parliament seemed set to destroy the nation but has finally ended with the restoration of Charles II. He is one of the players and has to deal with the Plague which now stalks the land and is trying to hold chaos at bay.

‘Darkwitch Rising’ has an intricate plot that twists and turns and involves the characters from the earlier books and, as mentioned before, you really have to have read the previous two books in the series before you cannot even begin to appreciate this book. If you have not read ‘Hades’ Daughter’ and ‘God’s Concubine’, you will not have the background to fully understand and appreciate the characters and the plot.

This book is not a light read and has no leavening of humour which I think often adds sometimes to a story. The author does give her characters some depth but, in my opinion, as well as her characters being generally unlikeable, she does create unreal alliances between characters when their interactions in the earlier books are recalled.

For instance, in this book, Cornelia (here called Noah) falls for and has a child with a man she previously loathed but seems to have had no difficulty in forgiving his many cruelties to her and his generally appalling behaviour. Nowadays, we would call it ‘crimes against humanity’, when he had abused and butchered whole populations. It is these sorts of liaisons which I found anyway made it difficult to find any of the recurring characters in any way sympathetic .

I did not find this book to my taste. That is perhaps somewhat unfair on Douglass as the writing is good with the scenes being well-crafted. If you do like fantasy then this may well be a series for you, as the plot is viewed through the eyes of many of the characters and does give the story a depth and richness not always found. In addition, Douglass wraps the tale in the period of the Restoration with Charles II on the throne, the Plague, the Great Fire of London, Sir Christopher Wren, et al to set the scene and brings that era to life. 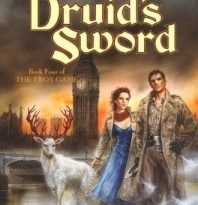