Just in case you thought the title of Lucia Peters’ book, ‘Dangerous Games To Play In The Dark’, was an invitation for derring-do, pay attention to the sub-title, ‘A Guide To Summoning Spirits, Divining The Future And Invoking The Supernatural’. Although described as a ‘party book’, the real meaning of that is the number of people, usually between 2-10, needed to partake in these adventures. Looking at the pocket-size of this book, I can see some of these games being played late at night by convention-goers who can’t sleep.

Mind you, come prepared with the right equipment for some of them, especially as you’re advised to destroy some of the equipment after. I’m thinking specifically of ‘Answer Man’ where you exchange mobile phones, ring each other and the one that doesn’t answer in the room answers. Logistically, thinking about it, I can see how that one can be played as a charade, just a little concerned about destroying all phones after as being terribly wasteful. 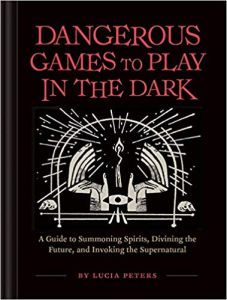 OK, so what you have here are 24 games spread over 6 chapters covering different themes as noted in the sub-title above. Suitable warnings are given in the introduction about being careful with lit candles and pointed objects and, in some cases, having plenty of room to carry out some of these objectives. Some of them are modern slants on old ideas. Oddly, none of them are actually written to be conjuring tricks although, as with ‘Answer Man’ above, I can see opportunities to cheat. If any of you folk try them out as per the book and have some success please email in what happened. If you are pursued by various demons, I’ll still be interested in how you resolve that because the solutions aren’t in this book. None of these games include passing the runes to an unsuspecting victim.

Some of these games hail from Japan, easily spotted when their original names are used. Although not Japanese, ‘The Midnight Game’ where you have to wander around your house in the dark where you have multiple rooms depends on not going the same way more than once. Like to see that be done in a UK home but would probably work better in other countries.

‘The Hide-And-Seek Alone’ depends on filling a small doll with rice and immersing it in water. I know hot water will cause rice to swell but the length of immersion must surely have a similar effect and cause it to burst.

Whatever, although Peters points out thing you mustn’t do after any of them, there isn’t anything explicit as to what actually happens. Let teenagers lose on these and it would be like a red flag to a bull and them taking a risk to see the consequences. Games like ‘Bloody Mary’, which I remember was used in an early season of ‘Supernatural’, would have you dragged into the mirror plain, although I’ve never heard of anyone vanishing like that.

Towards the end of the book, there are a couple games from Spain and Indonesia. Oddly, although an Ouija board is mentioned with ‘The Playing Card Game’, there are no games using one. Does that suggest Ouija boards are safe?

Although I didn’t play any of the games as I’m an unsocial animal, I am concerned that Peters doesn’t explain how to resolve things if you don’t play by the rules. Hands up those of you who might test the rules of anything and you can see the problem. If there are demons or you can converse with the dead, I might be concerned but I do wonder if those playing will let their imagination carry them off. As we know with voodoo, fear itself is stronger than the causes. I think I might enjoy a game of passing the runes instead. At least you know the demon is coming to get you.