Of the ‘Creepy Presents’ books, I was most sceptical when it came to buying the one focusing on Alex Toth, mostly because of his reputation of not suffering fools gladly. In his introduction, Douglas Wolk also points out that Toth was forever changing his style and never had a series directly associated with him. 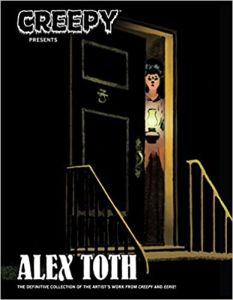 What we have here are the 21 stories Alex Toth did in ‘Eerie’ and ‘Creepy’ from 1965-1975. When he worked alone, he would pencil, ink and even letter his own work. Later, he inked significant other artists. Obviously, the work here shows his horror material and this book should be treated as an anthology of 6-8 page long stories. It’s a bit like getting a taste, the twist at the end and move on to the next story.

Toth does write and draw some of his stories. It’s a shame really that we don’t know how long he worked on each story or how he was influenced by the paper quality when he inked. Publisher Jim Warren relied heavily on newstock for printing in those days which would have had an effect on the quality of reproduction, not to mention how much he paid his creators. From looking at the stories here, Toth varied from a heavy ink approach to set up mood to a contrast light line approach that gave a different contrast. Either way, there is a somewhat emphasis on emotional content for the short stories.

Of all of them, the only one I remember reading when it first came out was ‘Daddy And The Pie’, the latter of which was a stranded alien on Earth living with a farm family, much to the suspicion of the local villagers which is still heart-warming at the end, even though his health-restoring device wasn’t used.

I do stand corrected at the end in one aspect and the final two stories written by Steve Skeates is actually a two-parter with a gothic detective seeking the murderer called the Hacker over a decade. A great story to end on. Don’t jump in the dark.