The first thing to consider with any kind of documentary is what the target audience is. This is an amateur video-film devoted to the world wide phenomenon of Cosplay. This is short for ‘costume play’ in which participants don costumes to represent characters from film, fantasy and comic, including animé. Anyone who has attended a Science Fiction Eastercons in the UK or a World SF Convention will be aware of the phenomenon of the masquerade. This can either be regarded as fun, with costumes put together during the event or very seriously. At World Conventions, those who are regular Masquerade participants will start planning their costume and staging a year ahead and their workmanship will be scrutinised closely. They want to earn the distinction of becoming a Master of their craft rather than just a Journeyman. It would be nice to say that Cosplay takes this to a higher level but on the evidence of this movie, it doesn’t.

The footage in this movie was shot at the London MCM Expo in May 2011 and purports to follow ‘a small selection of talented cosplayers’. What the narrative doesn’t say is that Cosplay is only one of the attractions as the London Comic Convention, although there is a small logo on the DVD cover.

The whole event is held annually over three days at the ExCel London venue and we are told that over sixty thousand people attended. Although the emphasis of this film was on those who elected to attend in costume, there was a lot of other things going on, including a vast dealer’s room which was visible in the background during some interviews. For many, this is one of the reasons for attending as they can buy memorabilia, books, comics and items to enhance their costumes as well meet the artists and creators of their favourite characters.

The Cosplay element of the event is not just a reason to dress up but also a competition, the winner of which being given flights and accommodation expenses at a European grand final later in the year. To win, contestants have several hoops to jump through. First, they are interviewed by a couple of experienced costumers who examine the quality of workmanship. The performance, on a raised stage in a hall capable of seating four thousand, is judged on a series of style points such as acting in character, putting on great poses and the way the costume moves on the stage. Have you ever seen footage of Mr. Universe or Body Building competitions? The posing part of the performance was very reminiscent of this, not so much showing off the costume but exposing the ego of the person wearing it. The workmanship of the costumes themselves, from the distance of the camera, often looked superb and a credit to the designers and crafters.

This film, though, didn’t display much of the skill the exhibiters showed. In any enterprise such as this, there would have been far more recorded than actually made the final edit. While some parts were well done, much of it came across as amateurish without enough thought and planning for the whole thing. When TV programmes have produced documentaries about events like the Notting Hill Carnival, they have followed participants through all the stages of planning and creating the costumes. Admittedly, TV companies have a much larger budget, but as those interviewed for this project are members of Cosplay, a more detailed study of the effort that went into the costumes would not have been impossible. As it was, the people interviewed came across as enthusiastic but nervous. The questioning was not skilful and the overall effect was that of nerdishness – which is probably not what was intended.

The acoustics of the venue were absolutely horrendous. Trying to talk to anyone in a vast space that resonates like the inside of an echo chamber is almost impossible. Yet there is equipment that can minimise such effects but was clearly not available to the sound recordist. Neither were any techniques applied to counteract it. The result was that part of the soundtrack gave a good impression of severe tinnitus. The sections of the commentary by the Master of Ceremonies suffered equally from this problem, to make him almost incomprehensible at times, yet as he was using a microphone there are ways of keying into the sound deck to eliminate the distortion. As it wasn’t done, it is enough to make one wonder at how official the recording was or whether it was a last minute decision to produce the footage (has everyone who appeared given their permission?).

The other problem with the editing of the movie was the order in which footage was shown. For many of the participants, the climax was on the Saturday with the awarding of the big prize. There was a further competition of the Sunday. Instead of finding ways to end the movie with the announcement of the big prize, the footage continued in a chronological order so that the latter stages were anti-climactic.

There were some good things about the editing. In the early part of the film, where participants in the area outside the venue showed off their costumes, sequences were overlain by good music and at the end there was a collage of costumers on stage which worked well.

Back to the original question, who is the target audience? Certainly anyone who appeared in the film and perhaps many who attended would appreciate this as a record of their experience. There is no doubt that they enjoyed being there. Those who are into Cosplay and who might be wondering whether to attend the next event in London would view it with interest but anyone who is looking for a good, informative documentary about the phenomenon of Cosplay will be severely disappointed. For anyone who is interested in costuming and participating in a masquerade, try the World SF Convention in London, August 2014 at the same venue, ExCel London. 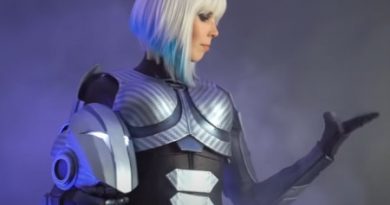