‘Corporate Gunslinger’ is a tale of the near future. There are the haves, there are the have nots and very few living in between. Human life is so cheap as to be meaningless to the rich which is a pity as its all the poor have left. 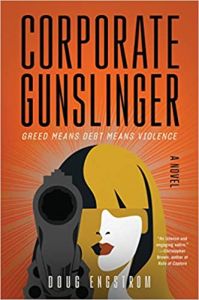 Kira wanted to be an actress. College is expensive. Loans were taken. Interest piled up. She’s out of options. The property recovery teams will be coming soon to foreclose on her debt. Once you’re Bound, that’s it. A lifetime of wage slavery where any actual earnings get eaten up by fees and charges and the debt just never quite goes away. They’ll own her. Signing up to be a gunslinger for an insurance company is her final hope of avoiding that end. Kira is contracted to fight twenty-six gun duels. If she survives, she might have nearly paid off her debt. If she doesn’t mind shooting people. If she doesn’t mind them shooting her.

‘Corporate Gunslinger’ is a story of how people fall down society’s rungs one slip at a time. Capitalism always wins and, intellectually, Kira understands that. Emotionally is another story.

This novel is an exercise in finding out what we would do to survive and if surviving is worth it in the end.

I don’t understand insurance very well. Particularly in the ‘Corporate Gunslinger.’ In our so-called real world you pay dues and then you claim due to an accident or emergency. The company tries to get out of paying in a legal tango that has become cliched. If they don’t pay, I guess you sue. It’s what seems to happen with most things in America. In ‘Corporate Gunslinger’, the right to sue seems to have been replaced with one-on-one gun duels to the death with standardised rules and firing zones. The insurance agent, who has been rigorously trained to defend the monetary assets of the company, shoots you and you lose. One shot each is the only right of appeal. Sure, you might win. Your one shot might kill the trained marksman. I’m not sure what that gets you, though. Perhaps your claim gets paid. It seems a risky bet. For a novel predicated on the financial aspects of life in a capitalist society with a protagonist about to have her life foreclosed on, I find it strange that there is so little in the way of explanation. What is in it for the little guy?

There is such a narrow focus in this novel. In some ways this is great. Kira’s small circle of people is interesting and well fleshed out. Beyond that? Things get hazier. The story is a blur of shooting ranges and city skylines. There are hints of warfare in other places, possibly at other times, but that is just a nod to a character’s backstory and nothing concrete to expand the world. Even Kira’s character is mostly her enormous debt and her moral issues about shooting people. Not that these aren’t worthy of focus but I’d like to think we are more than the sum of our bank balances and work contracts. All of Kira’s friends are co-workers. She spends all of her off-duty time in a company bar. While this is an interestingly grim look into the near future it is more of a grim look into the terrifying bowels of the insurance system than a commentary on the world unless the reader extrapolates. Which, of course, we can do, but expanding the gaze might have given a little more impact.

There might be a sequel, there might not. There is sufficient ambiguity for either this novel to stand on its own, which is does or for a long series of novels. Do I want to read more? Maybe? ‘The Hunger Games’ is perhaps the most obvious comparison with the rich watching the poor fighting for a brief, unsatisfying taste of the good life. ‘Corporate Gunslinger’ places the near-future nearer than post-apocalypse however, and perhaps that is why it is a little too real to sit comfortably as near-future.

One thought on “Corporate Gunslinger by Doug Engstrom (book review).”