There are some writers who set out to produce a ‘funny’ book. The problem is that one person’s sense of humour is somewhere on a very wide graph with childish slapstick at one end and the dry wit of Oscar Wilde at the other. The worst kind of ‘humorous’ novel is when the feeling that the author wants us to know how clever he is being or where the characters are constantly telling us how hilarious their antics are. Many of these are likely to enchant audiences if produced for TV or film but they don’t translate well to print. 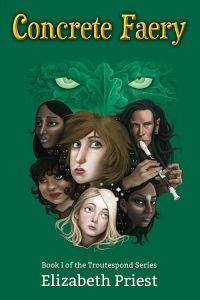 As in life, the humour in fiction should arise naturally from the characters and their behaviour. Elizabeth Priest has the skill to do this. ‘Concrete Faery’ amuses and entertains. It is a genuine YA novel with her main characters, at seventeen, discovering their insipient maturity and anticipating the prospect of leaving home for university if only they can pass their ‘A’ Level exams.

Ally, Tanya and Teb are friends who complement each other. Ally is totally scatter-brained. She acts without thinking and, despite it being March, has a tendency to leave her home without her coat, keys and shod only in flip-flops. Tanya is the mystical one. She knows a lot about the local history but can be impulsive. Teb is sensible but, if there is trouble, Ally gets blamed and her friends are guilty by association. All live in Troutesponde, a small town named after the saint who saved a girl from drowning in the local pond.

Ally has more than the usual problems to cope with. She is tired when she gets to school as she has been up a lot of the night sitting on a cold pavement in t-shirt and flip-flops with a dreadlocked piper who tells her he can’t talk to her until Saturday, the time of the town’s Spring Fair. She’s late for school, which is a minor thing when her teacher has a breakdown in front of the class. Somehow, the head thinks it is Ally’s fault and gives her the task of looking after Alana, a new girl transferred from the private school on the other side of the town. Both agree that their problems are caused by demons. They are not, quite. Though Tanya does get abducted by fairies.

Troutesponde is at a junction of ley lines, so weird things can be expected to happen here. There are ways through to Fairyland and Ally, Alana and Teb need to take one to rescue Tanya. Despite the fact that the situation feels unreal to all girls, take strangeness in their stride, not even fazed when the door to Fairyland is in a skateboard park guarded by two goblins masquerading as skateboarders. As the Winter Queen yields her Demesne to the Summer King, they have to use their ingenuity to resolve problems.

This is a book that carries the reader along with the characters. They make mistakes and cope with the consequences but each of the four girls grow in stature throughout. A book that is fun to read, and was probably fun to write and since this is the first in a series and a debut novel I look forward to them getting into more scrapes.