While he’s often compared with Stephen King as a prolific and successful writer of thoughtful horror fiction, Clive Barker’s career is highly distinctive. Alongside a succession of novels, short stories and graphic novels, Barker is also a filmmaker, playwright, artist and, in his own way, an influential ambassador for the queer community. Pulling all of these different threads together in a single book is a big ask, not least of all because what works on stage or screen, for example, doesn’t necessarily translate well into text or a small photographs. 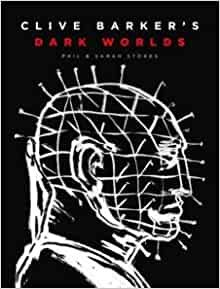 Still, what makes Barker unique among modern horror fiction writers is that he is simultaneously interested in both the words and images. There’s a symbiosis between his paintings and his literary output that simply has no parallel elsewhere in the genre and Barker has used leverage this in his filmmaking. There are many writers, not least of all, King himself, who write books that end up as films, but Barker gets involved in everything from costume to directing, even to the designs of spin-off toys. It’s this, more than anything, that makes a large format book like ‘Clive Barker’s Dark Worlds’ viable: Barker is as much artist as writer and everything he produces has its own aesthetic that blends visceral horror with darkly fantastical elegance, even eroticism.

Phil and Sarah Stokes are apparently friends of Barker’s and, as such, their book benefits from Barker’s input throughout. There are numerous behind-the-scenes photos at book launches and film sets, as well as asides from Barker and others that help you understand the choices made at particular points in time. ‘Candyman’, for example, is a film set in a Chicago, but the original story was set in a slum in Liverpool. So while it’s hard to imagine the eponymous spirit as anyone other than Tony Todd, the changes made went beyond mere ‘Americanisation’ for the target audience. By placing the film in the now demolished Cabrini-Green housing project, ‘Candyman’ the movie could make points about sub-cultures and racism that the original short story did not. Getting this sort of insight from Barker rather than through film critics or popular culture historians lends ‘Clive Barker’s Dark Worlds’ a sort of weightiness that isn’t common with celebratory anthologies.

On the other hand, what the Stokes don’t really do is unpick Barker’s work and critique it in any meaningful way. Barker is a prolific writer and painter, but is he any good? The financial success of his writing largely speaks for itself, but his impact on the genre and other writers isn’t discussed. While the themes of his novels and, to some extent, films are pointed out at various points, they aren’t really discussed. Returning to ‘Candyman’ for example, the Blackness of the film, compared with other horror films of the time, is described in Barker’s own words and the Black characters and Chicago setting are certainly important parts of the film’s success. But what we don’t have here are responses from Black Americans. There’s nothing, in itself, wrong with writing from a single perspective, indeed, that’s often the case with ‘official’ books of this sort. But students of the genre may find the book lacking as a resource for deeper criticism of Barker and his works.

One of the things that makes Barker’s work so memorable is the way his stories invariably have deeper themes, the gory horror part being there to make a point, rather than an end in itself. For ‘Weaveworld’ and ‘Cabal’, the latter turned into the film ‘Nightbreed’, a major theme is longing for things that are past or cannot be and, both of them, in different ways, tap into Biblical ideas about the fall of man and the need for salvation. ‘Hellraiser’ is more about a woman trying to recapture lost passion than good versus evil. Barker has a strong sense of what he wants to do with his creations, though how successfully he does that is not really explored here since the commentary is mostly from Barker himself. Still, the section on the film ‘Nightbreed’ is indicative of what the book aims to do. Based on a short novel called ‘Cabal’, ‘Nightbreed’ was Barker’s second go at directing a feature film (‘Hellraiser’ being his first). The book is sympathetic to the monstrous residents of Midian and a central theme of the story is that the monsters are different, not evil and the only truly evil character in the book is a human serial killer pursuing the protagonist. But thanks to script changes and cuts and the desire of the studio executives to produce a traditional horror movie, ‘Nightbreed’ is a bit of a mess. Some of the reasons for this are outlined here but it’s broad brush stuff and not the nitty-gritty that film historians might want. Nonetheless, the film is important as a turning point in horror filmmaking and has been seen as putting queer messages about differences and inclusion in front of mainstream movie-goers.

For me, coming to Barker as a fan of his writing rather than his films or art, a minor niggle is the question of balance. It’s an understandable issue, mind you. A coffee-table book needs to be filled with images to sell well and this one’s no exception. But the bias towards film and art and the relatively thin coverage of some novels, ‘Weaveworld’ gets a mere four pages, is disappointing. There’s so much that could have been discussed, that what you end up with feels a bit thin. In this case, something like half the text is simply lifted off the back cover or taken from promotional materials. To be fair, Barker also describes some of the themes of the book and there’s a bit about inspirations as well, but it’s all relatively brief compared with the far more detailed coverage of the films. Of course, if you’re coming at this as a fan of ‘Hellraiser’ or ‘Candyman’, you’re going to find the balance much more appealing.

As you’d expect for a book at this price point, production values are extremely high. Heavy, glossy paper shows off the photos well and there’s a good amount of text throughout the book. The Stokes are certainly delivering a solid read here. While you could dip in and dip out if you wanted to, the book would be equally rewarding read from start to finish. The only real flaw is the lack of an index, though the contents page does make it very easy to find the pages devoted to particular books or films. Barker’s artwork is not as well known as his films and books, so seeing his paintings here is very welcome, if only because they provide some additional insight into a man with a unique imagination. Barker himself sees all these art forms as interchangeable and this is probably the thing that makes ‘Clive Barker’s Dark Worlds’ work so effectively. Biographically arranged as well as richly illustrated, the man and his work can be seen, as well as read, developing through time. It’s hard to think of any other writer for whom such an approach would be necessary, let alone viable but, for Barker, this really is the best way to understand the man.