Amazon announced in 2015 that Jeremy Clarkson, Richard Hammond and James May would reunite to make a new car show available for Amazon Prime members, shortly after they left Top Gear after late-dinner-punch-up-gate. The show is produced by the trio’s long-time executive producer Andy Wilman. The team have committed to three series as part of this TV deal. The first series went into production in late 2015, and the series will premier for Prime members fall 2016.

So, Clarkson, Hammond & May are to call their new Amazon Prime Show The Grand Tour. Why?

Jeremy Clarkson man-splaned to SFcrowsnest, “Thing is, we’ll be travelling the world hosting each episode in a different country, from a giant tent. It’s a sort of ‘grand tour,’ if you like. So we’ve decided to call it ‘The Grand Tour.’”

James May admitted to being underwhelmed by the name. “I wanted to call it ‘Nigel,’ or ‘Roger.’ We needed a name, and they’re names.”

Richard Hammond was more positive. “I already love camping,” he enthused, “But this is something else. We are like our pioneering and prospecting forebears, sallying forth into a new frontier of broadcasting, and making our home where…” But at this point Clarkson and May strangled him with a guy rope.

The Amazon Prime show will feature short films shot in different locations around the globe and the studio audience portion of the showcase will also take place at a different location around the world every week. The pre-recorded studio sections of the program will be filmed in front of a live audience, all housed within a giant tent. Therefore in this spirit of travel, adventure and intrigue, the presenters have decided to call the show The Grand Tour.

The Grand Tour will launch this fall for Amazon Prime members and the new travelling format means Amazon customers around the world will have the chance to be in the audience when tickets are released through a sweepstakes this summer. Details of the location schedule and information on how to apply for tickets will be announced shortly. 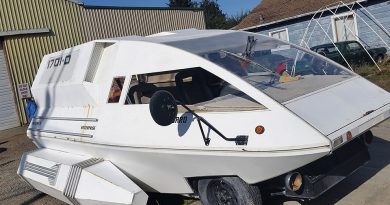