In some respects, Jacqueline B. Frost’s book title, ‘Cinematography For Directors’ could be seen as a bit of a misnomer. What the content is all about is the role of the director of photography (DP) or cinematographer to the director of the film rather than turn the director into a DP. Hence the sub-title, ‘A Guide For Creative Collaboration’. 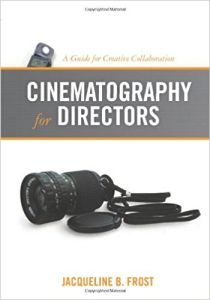 For the sake of the review, I’ll stick to calling the job DP as it’s less a mouthful saying ‘cinematographer’ all the time. If you thought this meant the DP was just the cameraman, then this book will put you right. The director has the vision of what the film is all about and it is the DP’s job to interpret this technically and offer solutions in getting the right colour palate and mood for the set and filming it. Artistically, the director is the artist and the DP is his brush. As such, the DP works very closely with the director and with equal enthusiasm to get things done.

Throughout this book, Frost has soundbytes from members of the American Society of Cinematographers’ (that’s where the ASC comes after their names) and I found it interesting that there are only 340 of them today. It does make me wonder what keeps the number down, though.

There is some debate as to how technically savvy the director is to the DP and the chapter on lenses should definitely be read if you’re aiming to be a director if only to be able to say what you want. I should point out that there are a lot of photo references, especially of equipment, in his book to show you what they mean. Also surprising, there is a large section in colour although when you consider that’s how films are made, that shouldn’t be a surprise.

Don’t forget, part of the DP’s job is to make sure the film has the right lighting conditions to get the best effect and is often the longest part of setting up a scene. Seeing how the various lighting is done here can be used beyond filming and even into painting or drawing so don’t think that there aren’t lessons for all to be learnt here.

Even more so when you learn more about film stock and the Kelvin colour temperature palate and its application. In fact, it makes more sense why the DP is always interested in the prevalent light of any scene and how it’s absorbed onto film. If you’re wondering about High Definition video recording, that really gets more depth in the last few chapters of the book. Some DPs embrace it while others are reluctant until they have to although is now essential for high level special effects movies.

Another oddity comes from a look at film genres. Although horror gets its own section and even super-heroes as the new genre, nary a mention of Science Fiction as a genre. This is despite the fact the colour choices for ‘The Fountain’ (2006) is given. Other SF films get brief mentions but I almost get the feeling that Frost doesn’t understand our genre.

It should come as no surprise that you are run through all the DP filming techniques with special attention giving to the difference between using a dolly to move the camera in a scene and using a zoom lens. There are also photographs of the various equipment used and its application from examples in making a film so you can develop some familiarity with it all.

Back to digital cameras. It should hardly be a surprise that there are a variety of cameras. One of the biggest concerns is always making back-ups of what is recorded and the problems of longevity compared to film. Actually, this is a problem any of us computer-users have. I would always maintain having copies of anything important to be saved to DVD as well and be careful with solid-state hard drives as, like with USB memory fingers, they can rapidly run of the number of times you can access them.

There is a lot to digest from reading this book. If you have any interest in how films are made, then you will come away from this book with a deeper appreciation as to the work of the DP and how some of the more subtle things done with colour are done to the mood of the film. Some of which is so sublime that I took it for granted as part of the landscape being enhanced rather than being subtly changed.

If you’re as aspiring director or want to be a director of photography then you will certainly want this book on your shelf and I imagine it would be well read and referred to. As even the big studios rent their cameras than own them, I imagine some of you will take that route to learn how to use them. Cue. Action.

One thought on “Cinematography For Directors: A Guide For Creative Collaboration by Jacqueline B. Frost (book review).”