‘Chainfire’ is the tenth book in Terry Goodkind’s ‘Sword Of Truth’ series and was published in 2005. On-line sources differ as to whether this is the tenth or ninth book but I count nine preceding volumes in the book’s end paper so tenth it is. The ‘Sword Of Truth’ series starts with ‘Wizard’s First Rule’, published back in 1994. This reviewer read that first volume back when it was published and I must admit that I was never inspired to pick up any more of Goodkind’s volumes. 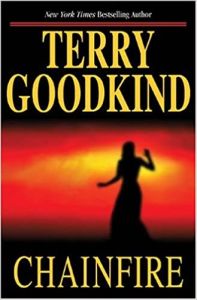 So I have approached ‘Chainfire’ with a little trepidation. Once again the text weighs in at a hefty 667 pages and I have seen some the intervening volumes which seem to be of similar heft. However this is the tenth volume and I am given to understand that Goodkind has many fans as evidenced by the on-going series and its spin-offs, which amount to 20 or so books. So someone must be buying them! Maybe by the time Goodkind has got to his tenth book he has tightened up his writing? Surely with all this practice he must be getting slicker.

‘Chainfire’ represents the start of a new series in the cycle. The main characters that have been with the story since ‘Wizards First Rule’ are still present. Truthseeker Richard Cypher is now Lord Rahl, leader of the D’Haran state, which is significant elevation since the end of the first book. The wizard Zedd features as a supporting character and Richard is joined by Nicci and Cara. Nicci is a former Sister of the Dark, who was a sinister antagonist prior to Richard’s converting her to the light.

Nicci provides magical help to Richard and is devoted to his protection. Similarly, Cara is also a former antagonist who is quite the opposite. She is a member of the Mord-Sith, which is a group of fanatic assassins trained to destroy magic users. Both of these characters clearly joined the story in the intervening novels, but there is no fear that this will be confusing as Goodkind takes great pains to explain their histories and former exploits at length.

Kahlan Amnell is another continuing character who has been with us since the first volume and about whom the plot essentially rotates. Kahlen is, by this time, married to Richard. Richard awakes after recovering from a severe wound to find that he is the only one who can remember Kahlen. But all the other characters think he is delusional as they have no memory of her. Naturally, the reader knows she exists as she has been present for nine previous books. Clearly some kind of powerful magic is at stake. Alas, the constant agonising over this and endless efforts on behalf of Nikki, Cara and, eventually, Zedd to convince him that he is nuts grows very tiresome after a while.

This is a good example of the main problem with Goodkind’s writing. The text contains endless meandering with internal monologues and agonising concerns about memories from previous books. The actual story is fine and the characters are pleasant to follow but it is so wrapped up in page after page of repeated collateral emotion that a well-written 300 page book gets turned into a bloated 667 page book. I cried out for some good editing many times during reading. It is a shame as I did find much to like.

The setting is colourful, the action dramatic and Goodkind’s description is efficient and evokes the setting well. But when a major character like Richard is in the middle of an action sequence involving perilous swordplay, it is very jarring for the encounter to be interrupted as to suddenly spend two pages describing Richard’s memories of an earlier similar encounter before returning to the action. How on earth did that kind of structure end up in the published text?

I suspect the answer lies in the number of successful books Goodkind has produced. As far as I know, they sell well and cannot see any of them that are less than great huge tomes so I suspect the publisher doesn’t want to interfere with a winning formula. There must be lots of fans that have no trouble at all with Goodkind’s kind of writing. Alas I am not one of them. I have no trouble with long texts and have thoroughly enjoyed things like Peter Hamilton’s ‘Night’s Dawn Trilogy’, which weigh in at 1,200+ pages per volume.

Where Hamilton populates his volumes with many well-portrayed characters and weaves an enormous tapestry of compelling story, Goodkind presents an essentially simple story focussed on about seven main characters which is filled out with the aforementioned repeated memory searching and agonising.

Naturally, the book does conclude with some progress on the issue with Kahlen but is only the first of a new trilogy and so not everything is wrapped up. However, this conclusion does give the reader a sense of some satisfaction as it does address a lot of the previous agonising. Indeed, this reviewer would like to find out what happens at the overall conclusion but balks at the prospect of wading through the next two books.

I am aware that Goodkind passed away recently. Although I don’t wish to speak ill of the dead, I can imagine a fair few forests breathing a sigh of relief now that they a no longer under threat from the vast quantities of paper required to publish his books.

I guess if you have avidly read the previous volumes, you may well hunger for more. I suspect this will deliver but, to a wider readership, I find I cannot recommend this to anyone! I must entreat folk to avoid Goodkind and read other prospective fiction as there simply isn’t enough time in an average human life to waste wading through the ‘Sword Of Truth’ series.