Bad news for all the Star Trek fans who have been happily mooching along with Discovery after the inclusion of middle-aged Silver Fox man-candy Anson Mount as Captain Pike, taking over command of the Discovery for season two after the previous skipper was found to be a Mirror Universe rotter.

He’s also taking Rebecca Romijn with him, playing his first officer, Number One (she must have another name, surely, not just the rank), as he heads back to the Enterprise with Spock in tow.

Pike is – we are told – departing the Discovery hale and hearty, so no career-ending spinal injuries for him quite yet.

So, guest appearances aside, it looks like there will be a new, new captain on the Discovery for the 3rd season of Star Trek Discovery.

Who could it be, then? Hmmm?

I hear there’s an ambitious young Commander looking for his first posting as a Captain who came to Star Fleet’s attention during the Klingon War, an enterprising fellow who has been fast-tracked for a Captaincy by one Vice Admiral Katrina Cornwell.

And his middle name is … Tiberius! 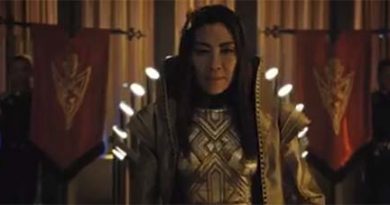