In Scott R. Jones’ masterful collection, Shout Kill Revel Repeat, the reader is made to feel like the lone survivor of a shipwreck plunged into a turbulent ocean with each successive story appearing as a monstrous wave, ever-threatening to be the one that washes you under. But as should all serious writers navigating such dark waters, he provides the reader with a beacon to assure us that no matter how grim things have become, there’s always some hope on the horizon.

In his case, Jones uses a stunning proclivity for language as his light-shining-bright and though his style might seem overly excessive, and downright dense, to some readers, what he achieves through it is nothing short of irrefutable proof that the true power of the written word must reside in its ability to reassert our humanity over the technological artifice which has come to dominate our world. A troubling, oftentimes brutal, collection of stories which captures the tenor of our times with a conviction rarely seen in contemporary literature and while – by design – it won’t be for all tastes, the jury is genuinely excited to see what its author comes up with next.

In The Migration, complex ideas stretch out in a deceptively simple narrative style. The novel wrestles with illness and disability and, below the surface, being a refugee on the run. The afflicted youth are stigmatized, and then they—what? Change, evolve, grow?—into forms that seem threatening and are further stigmatized but are also framed in angelic imagery, yet they aren’t so belittled. The big question: are they still human? Are they zombies? Are they evolved? Who gets to be human? Are eugenics at play in the medical treatment? A harrowing and often beautiful story.

Coming-of-age, identity, family history, cultural history, colonialism and its legacies, an historical mystery, a compelling main character and narrator, and a trickster god, and that’s not even the half of it. Deft use of comedy supports, never subverts, the sacred. One roots for Hazel Ellis from the first page and her flaws just make her all the more relatable. The novel’s world is seamless, with Nanabush as vivid and believable as any of the human characters. Canadians unfamiliar with our colonialist past and how it affects us still can learn a lot from Crow Winter.

Gods of Jade and Shadow by Silvia Moreno-Garcia is an exquisite genre blender with a painfully human story at its heart. Set in Jazz Age Mexico, it tells the tale of Casiopea Tun, a young woman who works as a servant for her grandfather until she discovers the bones of a god hidden in the house and inadvertently brings the dead god back to life.

The two set out on a mythical road trip of sorts to restore the god’s power and return him to his rightful place as the ruler of the underworld, now controlled by his usurper brother. Along the way they encounter spirits, sorcerers and other magical beings, as they journey through worlds both mundane and mystical. Gods of Jade and Shadow masterfully mixes together fairy tales, romance, historical fantasy, a coming-of-age feminist story, and a lavishly detailed odyssey through Mexican history and mythology. It is truly a tale of the fantastic, defying categorization while celebrating the magic of imagination itself.

Richard Van Camp’s Moccasin Square Gardens breathes life into a wealth of lively characters populating Denendeh, north of the sixtieth parallel. His masterful sense of rhythm, timing and suspense are on full display in this unforgettable collection, much of which is truly hilarious. From the tender love explored in “Aliens,” to the terrifying futuristic “Wheetago War I” and “Wheetago War II,” Van Camp’s ear for dialogue reigns. Where are the warriors? this book asks. And it points: trapped, wounded inside adult bodies, calling for medicine, for healing to begin. Or else, wakened from lusty dreams to train, to hunt, to fight; strong women and men, side by side, defending a community under attack by enemies both ancient and familiar. In this exceptional book, the old ways are told anew by a seasoned and beloved storyteller.

Nafiza Azad, The Candle and the Flame [Scholastic Inc.].

A beautifully constructed world with fascinating metaphysical ideas and many surprises in the plot for rich characters to navigate. The emotional and intellectual honesty of the novel—that the characters’ growth is not just difficult but painful and yet so very necessary—is particularly admirable. Contemporary readers can relate to how a journey to a more just society may be difficult but cannot be avoided.

Nevers by Sara Cassidy recounts the charmingly chaotic tale of resourceful, fourteen-year-old Odette and her seductive but “mortally clumsy” mother, Anneline, who make a home for themselves in Nevers, a town in rural France, circa 1799. Odette is as drawn to solving local mysteries and providing domestic stability as her mother is to creating romantic pandemonium undermining the social order. This magical romp brings a contemporary lens to an old-fashioned setting by including a diverse cast of characters, whose journeys coalesce in the communal pursuit of harmony and love.

Aviaq Johnston, Those Who Dwell Below [Inhabit Media].

Aviaq Johnston’s gifts for narrative storytelling are on full display in Those Who Dwell Below, her follow up to the critically-acclaimed Those Who Run in the Sky. On the surface the novel is a thoroughly engaging re-imagining of the Inuit Nuliajuk legend involving a teenage shaman on a quest to appease a vengeful and fearsome undersea spirit, and thus save his village from starvation, but where the book really shines is in her characterizations of a people who inhabit a world ever-teetering on the brink of calamity. Accompanied by often-times startling black and white illustrations by Toma Feizo Gas, the book reveals a writer who is unafraid to take the reader to a place they may not wish to go and it’s a testament to Aviaq’s considerable prowess as an author that by its closing pages one can’t help but be grateful that she had the courage to lead us on such a perilous and ultimately transformative journey.

Nikki Tesla and the Ferret-Proof Death Ray is the perfect formula for YA readers. The tale of a loner finding a place at a secret school of like-minded young geniuses who attempt to stop an adult from ruining the world, it is a quirky and charming coming-of-age story. It’s also a fantastic grab bag of genres, mixing up mysteries, thrillers, romances, spy kids and secret academies in a delightfully designed and illustrated package. This is a series that every young person in your life should be reading.

Delightful and haunting. A delicious blend of the supernatural and the very real. Mills has great respect for her audience, taking great care to keep the narrative moving while never simplifying the novel’s ideas and themes of loss. The result is a nuanced study in empathy for both the characters and the readers.

Rebecca Campbell, “The Fourth Trimester is the Strangest” [The Magazine of Fantasy and Science Fiction, May/June 2019] 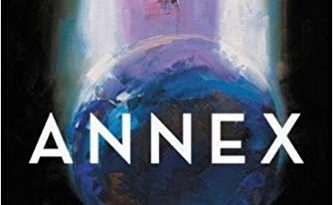