‘Bugs In The System’ consists of three novelettes set in an area of space known as the Void. After a somewhat mysterious prologue in which some beings are downloading their consciousness into robot duplicates, we move onto ‘Part One: Collective Revelations’. 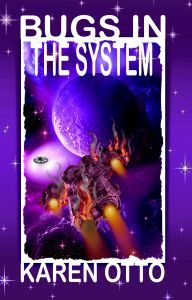 A crew of aliens are escorting a deadly prisoner back to their military base. Remmis Firehorn is of a species called the Furus, known for being angry and dangerous. The Captain of the Guardian Star, a transport ship of the Em’Qua Collective, is Kov, an Alkan who resembles an alligator and has a short temper. His crew are a tall blonde human woman named Samit and En’Kel of the species K’Pal, a quadruped five feet tall with plate armour and talons.

As this adventure features both humans and aliens, we can assume it’s set in a galaxy far, far away. While passing a black star, the crew receive a signal which indicates there is a Swarm base nearby, far too close for comfort to the Em’Qua Collective. Swarm are insect creatures with a hive mind who enter the body of other sentient beings and control them, rather as a puppet master controls his puppets. This was a solid adventure story with a few good plot twists.

‘Part Two: Frozen Secrets’ ties into the first story via a newscast and then proceeds with the tale of Ayanna, a Psiren. Her species is known for their ability to sense the thoughts and feelings of others and also for their libido. She’s on a passenger ship to her home planet, Gazya, and has an adventure when the ship is hijacked. This story gets surprisingly brutal in places but military SF can be like that.

‘Part Three: Breaking From The Past’ features characters already shown and a new one called Senna who has a cybernetic right arm and leg and a slug in her head called Tenant to help her through life. This is a quieter sort of tale and ties up some threads from previous ones.

An exciting set of adventures. There are so many alien characters that it can get a bit confusing at times but I’m old and easily confused. Overall, these yarns brought to mind the Robert Silverberg collection ‘In The Beginning’, wherein the old master put some tales from early in his career that he had bashed out to fill the pages of small magazines and pay the rent.

They were what most people think of as ‘Sci-Fi’, namely ray guns and rockets ships and funny looking aliens fighting. There are, of course, other sorts of Science Fiction but this kind of light entertainment is a solid sub-species of the genre and very popular. Indeed, it dominates the silver screen. I enjoyed the book.