Firstly, I should point out that the title, ‘Buffy To Batgirl’ is a bit of a misnomer because the covers 14 TV series/characters with some overlap and in a longer range of letters. The sub-title will brief you better on the subject matter, ‘Essays On Female Power, Evolving Femininity And Gender Roles In Science Fiction And Fantasy’. In other words, over the 12 articles by 13 writers, one is a double up, of how feminism has changed existing characters to new characters. All of which was derived from a lecture tour that was originally names ‘Pippi (Longstocking) To Ripley’. Oddly, Batgirl isn’t actually covered here although Buffy gets three accurate pieces and even ‘Firefly’ so there is some love for the Whedon-verse. 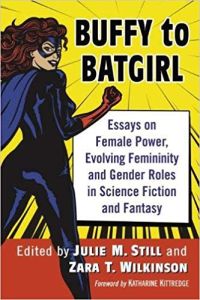 When it comes to Buffy, Kerry Bowles gets creator Joss Whedon’s desire to flip the expected having nothing to do with feminism. It’s also rather interesting as she makes similar connections to the various fables that get a modern twist in the series.

I have to confess that I’m not up on all the characters or TV series they discuss but all the writers here give but they are thorough in their examples to explain why. Oddly, when they reference other books, they often include ones that I’ve reviewed here. A quick reminder for those of you in the UK, Eurospan are their main supplier.

The second section looks at supporting characters elevated to leading roles, using Sarah Jane Smith from ‘Doctor Who’ from our genre. It’s hardly something new, though. One only has to look back to ‘Rhoda’ that came from ‘The Mary Tyler Moore Show’ as an example that it also happens in other shows providing the character and actress is strong enough with a good ratings. Sarah Jane Smith was the only companion deemed strong enough to support her own series and that really hasn’t changed. Had Elisabeth Sladen had not died, I’m sure the series would have continued. Something that is missed from Sandra Eckard’s piece though was Sladen was in her 60s playing younger than her actual age.

In many respects, Sandra Eckard’s observations of the development of Lois Lane at DC Comics and in films over the years could have been helped but drawing some comparisons to the other lady characters there. Martha Kent herself has had similar transformations for instance. If anything, it’s more a demonstration of moving with the times than having them standing still in particular roles.

I wasn’t sure what to make of ‘Alternate, Not Arrested Development: Bryan Fuller’s Female Protagonists’ by Trinidad Linares because its less about Fuller’s involvement and more that he produced 3 TV shows with female leads. Although I barely saw ‘Pushing Daisies’, let alone ‘Wonderfalls’, I am more than familiar with ‘Dead Like Me’ which came up with some useful observations about George Lass. One thing she didn’t pick up on was that her mentor/leader Rube was also pretty much a deadbeat like her when he first became a reaper.

I’m not sure if I agree with Al Valentin what ‘Oswald the Lucky Rabbit, Felix the Cart, Bosko, Mickey Mouse, Bimbo, Foxy or Piggy are clear examples of characters modelled after blackfaced actors’. Bimbo is Betty Boop’s dog and she herself was originally going to be a dog. Skin colour wasn’t considered. It wasn’t as though many famous black actors back in the early 20th century and, if memory serves, there were more famous black faces in jazz, many of whom were used as caricatures in animation. If early animators were doing that, then who was Daffy Duck supposed to represent? I doubt if any early creators were saying let’s turn black people into cartoon animals. They are too well documented for that to avoid becoming public knowledge, more so as many started out in black and white cartoons before colour.

As you’ll note, I’m hitting on things I can adequately say something about. There are a lot of shows discussed here, so there must be something for everyone and, based off my reaction, plenty to debate. It does become pretty obvious that the role of the female heroine is no longer a sidekick but a lead in her own right now. Although nothing much is given about their creators and how they view the characters they create, let alone which sex they are, studios are less afraid to choose this option.

I’m surprised that Vanessa Ives from the TV series ‘Penny Dreadful’ wasn’t explored and I could add that likes of Sydney Bristow from ‘Alias’ and Nikita from her self-named show but I guess that is still dependent on what the writers here have seen themselves. However, they have covered more series than I have seen elsewhere.

The main conclusion is women rule but you already knew that and it’s great that its growing.