I feel the same way about horror movies. I can understand the thrill of an action film, the wonder of SF, but demons, vampires, slashers and zombies not only leave me cold but I also can’t understand why you would go to a movie to be scared out of your wits.

However, as a fan of movies, there are some films that you absolutely should watch: ‘The Shining’, ‘The Exorcist’, ‘Witchfinder General’, all incredible films stuffed inside the horror or gothic genre. The examination of the genre from the perspective of the UK’s output is the subject of Barry Forshaw’s ‘British Gothic Cinema’, a history of the British horror film.

Let’s be clear, this is a focus on ‘horror’ rather than ‘gothic’. Nowhere does Forshaw talk about the recent British adaptations of ‘Jane Eyre’ or ‘Wuthering Heights’ for the silver screen, this book is focused on telling the story of the British horror movie in blood-curdling, gory detail. Specifically, this is the story of Hammer, the studio that defined the UK’s take on gothic cinema.

My first thought on reading the book was that this was a Hammer history that had been worked into an examination of UK horror at the request of the publisher. There’s little here that would surprise anyone who has read Marcus Hearn’s books on the studio or seen Mark Gatiss’ excellent BBC 4 documentary on the history of horror. However, it is interesting to see it placed in a history that simply focuses on the UK, while only touching briefly on the influence of the USA, where cinematic horror thrived from the 1930s onwards. As the author acknowledges what constitutes a British horror film is difficult to pin down. Does one count Roger Corman’s ‘Masque Of The Red Death’ filmed by American International Pictures? Forshaw barely gives it a paragraph, though the film is recognised as British. One omission that surprised me was ‘Alien’. Admittedly, made by a US production company and studio but filmed in the UK with a British director and crew, with model work carried out at Bray Studios, the home of Hammer. As a slasher-come-haunted house movie masquerading as SF, I thought it may be included.

Other entries are surprisingly short. ‘The Wicker Man’ is barely given a page and yet is considered to be one of the all-time classic British horrors. Some subjects are omitted altogether. Ken Russell, whose ‘The Devils’ should surely be considered horrific enough for entry, is missing. Not to mention his film on Shelley, ‘Gothic’, or the demented but memorable ‘Lair Of The White Worm’. Ken Russell is given a mention in the interviews at the back of the book, but that’s it.

Ultimately, I felt I had understood a large part of the UK horror story, specifically Hammer, but believed that the overall story was still not quite there. The chapter on gothic TV for example points out that ‘Doctor Who’ successfully implements gothic elements more often than not and usually stolen from Nigel Kneale, but the chapter fails to acknowledge that, for example, children’s TV in the 1980s became the best place to watch gothic stories ‘The Children Of Green Knowe’ and ‘Moondial’ spring to mind. These examples may be loosely related to the overall subject, but give an indication of the paucity of examination. That said, some films are covered in good detail: ‘The Curse Of Frankestein’, ‘The Devil Rides Out’ (a personal favourite), ‘Night Of The Demon’ and ‘Witchfinder General’ are given ample space for discussion.

‘British Gothic Cinema’ may be a succinct overview, but I fear there is too little detail for the genuine horror fan and film historian alike. Whether it can fulfil the needs of a mainstream audience remains to be seen. 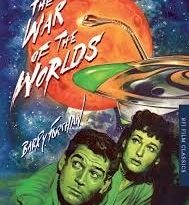 The War Of The Worlds: BFI Film Classics by Barry Forshaw (book review).

The War Of The Worlds: BFI Film Classics by Barry Forshaw (book review).