If there’s one thing the BBC does well, it’s radio drama. ‘Brave New World’ is no exception, carefully adapted to bring the themes up-to-date without detracting from the original qualities of the book that have ensured its consistent popularity over the last 90 odd years. 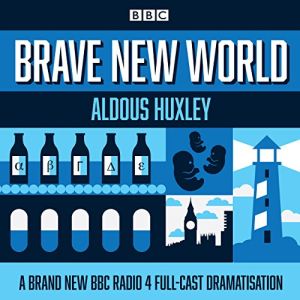 The basic premise is a dystopian future world that divides people into different categories before they are even born, by controlling the development of human embryos using a particular process involving oxygen deprivation. The idea is that everyone is pre-adapted to the job they’re going to do in the new World State. Categorised from the smartest types at the top, the ‘alphas-ones’, to do the administration, down to the least intelligent, the ‘gammas’, who do the manual labour. In fact, nobody in modern society has babies in the natural way and instead embryos are grown in hatcheries, then conditioned instead of educated and, once mature, go on to live happy and productive lives.

Ensuring their happiness is a ubiquitous drug, soma, as well as a promiscuous attitude to sex. Any sort of long-term relationships are rejected, since the idea of families and parenthood has not only become obsolete but actually repulsive.

As you’d expect for a book of its age, updating ‘Brave New World’ to our modern world required a little more than simply having the actors read out the lines. For a start, breaking the fourth wall, one of the characters places the story into our timeline by alluding to the Americans electing an ‘amoral, aggressive gangster’ and the damage caused by climate change. The super-wealthy shored up their power by leading the masses into a culture of consumerism and ‘no-strings sex’. All of this is very much in keeping with the spirit of the original book, Huxley being very critical of what he viewed as the socially loose morals of his time.

The cast is strong. Familiar voices include urbane Jonathan Coy as Helmholtz Watson, one of the upper caste alphas who is disillusioned with the new World State, and the unmistakeable Anton Lesser who plays the Director of the Central London Hatchery where embryos are adjusted and grown. Justin Salinger plays the main protagonist of the first half of the story, Bernard Marx, who takes a trip to a native American reservation where he discovers John, the son of the Director, John, played with suitably youthful and angry intensity by Milton Lopes.

Having grown up among ‘savages’ who still hold onto the old ideas of families and marriage, when he is brought back to England, he becomes a celebrity as well as an outsider. Pippa Bennett-Warner plays Lenina Crowne, a role she performs with the complexity it requires. Crowne is uncomfortable in the World State society, but not ready to openly rebel against it. At the start of the play is enjoying a long-term relationship with a man she thinks feels the same way, but ultimately does not. Her passion for the savage John drives much of the action through the second half of the play and her and his ultimate fate denies the story anything like a happy ending.

Apart from the strong cast, the production values overall are outstanding, right from the cheery music that kicks the thing off through to all the subtle sound effects that help to set the scenes perfectly. Pacing is good. The novel itself is relatively slow, but the play concentrates on a few key scenes, giving them enough space to breathe while using Watson’s narration to provide context. While the play isn’t exposition-heavy, it does hinge around the idea of somebody writing down their thoughts for posterity.

Overall, an enjoyable couple of hours. ‘Brave New World’ remains a potent warning of where society might be heading, should it put pleasure and consumerism ahead of family and education. 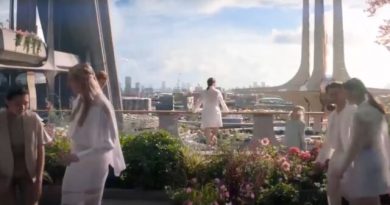