A quick clarification. ‘Blood Bowl: Team Manager’ is a spin-off game of another highly successful board-game called ‘Blood Bowl’. That game was first released back in the late 80s and I am old enough to remember buying that first edition. It is a testament to the game that it has retained its popularity and seen several revised editions through the years.

So what is ‘Blood Bowl’? Well, it’s actually quite simple. Think American Football but with fantasy teams played out on a board that is designed to look like a playing field. The teams are made up of the old classics like dwarves, elves, humans and the like. These teams will compete against each other to score as many touchdowns as possible, and maiming the other side’s team whenever you can and thus win the game. Being that they are fantasy teams, each race has particular skill-sets that influence their style of play, from sturdy dwarf defensive tactics to psychotic offensive punching techniques employed by orcs.

‘Blood Bowl’ was created by Games Workshop and as such, draws specifically from their particular take on the classic fantasy races. Games Workshop created a medieval fantasy universe, which is used in their wargame system called ‘Warhammer’, a tabletop mass battle system that involves moving lots of highly detailed lead and plastic soldiers around a table by rolling buckets of dice. The teams used in ‘Blood Bowl’ are made up of the races that exist in ‘Warhammer’. For the purposes of ‘Blood Bowl: Team Manager’, ‘Warhammer’ is essentially a narrative shell. The game of ‘Blood Bowl’ would never really exist in the ‘Warhammer’ universe because the races would be fighting each other for keeps. This game is about winning…well, the game! The different races give you options to try different play-styles. There are no quests, no over-arching storyline, no role-play, unless you want to that is.

So what can this spin-off bring to the party? Well, first off the bat, this is a Fantasy Flight game. So a big tick there. I don’t think I have played a bad game from them, although as far as rules go, they do tend towards the complex side of life. It is also a card-based game. There are no figures or playing arena required, just a flat surface. Pubs are very good for providing those and also offer an excellent milieu for playing in.

The game itself seeks to create the thrill of a ‘Blood Bowl’ season rather than the madness and mayhem of a one-off match. As the name suggests, it is the role the managers play in the ‘Blood Bowl’ game that matters. So a player gets to experience a number of set-pieces throughout the season that are called Highlights – essentially key moments of a game where they can influence the result by committing key players or resources. The aim of the game: win fans. It can be by skullduggery (cheating is mandatory!), great merchandising or by that old favourite, extreme violence. Just give them what they want and reap the benefits!

Depending on the number of players, there are a number of weeks to the season and within each week, a number of Highlights. The lead manager for that week can choose where to place his players and resources fight for the rewards offered in each Highlight. These rewards can be fans, staff upgrades, team improvements or star players.

A quick note about star players. Your starting team is made up of solid but mundane players, gaining star players massively improves your chances in winning a Highlight because they bring extra skills and abilities. Most importantly they bring star power points – these are used to work out who wins each Highlight.

After the first manger has played a card on a Highlight, other managers take turns in contesting or passing as they see fit. An important game feature is that only two managers can contest each Highlight. So a manager that is the last in the sequence for that week may well miss out to a degree. This is where the strategy comes into play – understanding your team’s strengths and thinking about future weeks within the season. It may be you want to hold off committing key players until the following set of Highlights where they can be more effective. There are also special tournament cards (essentially an extra Highlight for that week) which gives all the managers a chance to fight for the spoils. This is a nice extra twist and means more opportunities for the managers to get low down and dirty. This is perhaps, for me, the moment when ‘Blood Bowl: Team Manager’ most resembles the original game as everyone gets to pile in for the madness!

This is the important point: ‘Blood Bowl’ was always fun and a little crazy. This game, whilst trying to replicate that, never quite hits the comedy heights. Also and quite clearly, the game is leaning heavily on the ‘Blood Bowl’ heritage, so do you need to know of that game and the ‘Warhammer’ world before you play? It adds an extra dimension certainly, although the gameplay is strong enough to survive without it. Once we were sorted on the rules, there were many cries of ‘Ooh ahhh, you bugger’ as cards were played or cheating paid off.

My biggest gripe is that the rulebook is not necessarily as clear as it could be. It took us three games and much discussion before we ironed out how the flow of the game is supposed to work. Kudos that even though we played it wrong for the first two games, it still worked and was fun! The rulebook was not clear about the order in which players laid cards or indeed how tournaments should be treated. They had one worked example that was only a basic set of moves rather than explaining how a sequence of events could play out in a Highlight if more characters are committed to the fray.

That said, ‘Blood Bowl: Team Manager’ was a fun game. My three colleagues all agreed on that. They also walked away wanting to play it again. The way the game mechanics works means that there is still everything to play for in the final scoring phase, if you have employed the right strategy. Having six teams, each one a different race to choose from, helps to keep things fresh and there is now an expansion pack with more teams available.

So all in all, I’d recommend this game. It’s fun, tactical and once you know the rules, can be played at quite a speed so that it doesn’t outstay its welcome. Nice work, Fantasy Flight. 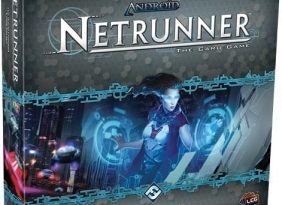