In a story which started in ‘Fractures’, Andrew Smith picks up with Blake and his merry band in ‘Battleground’. The group have determined they need information from the mysterious Mickelov, who was connected to an important Federation project at the very top. Now the only place left to look is Straxis. As they are head for Straxis, a planet used to train Federation troops, we are made increasingly aware that the cracks are getting wider in the groups uneasy friendship. Avon is Mr. Always Right and Vila always Mr. Wrong and the snarky behaviour continues.

Straxis is a dangerous place to be with people you can’t trust as there is a full-scale battle going on. There are 18,000 Federation troops ready to party when Blake arrives and manages to get captured by ex-planetary governor Abel Garmon (Tim Bentinck) who is in charge of a tattered brigade of prisoners, the cannon-fodder for the Federation troops. Avon gets captured by the other side and the games commence

Alexa Mickelov is a battle tracer and is reviewing the performance of Commander Voss Verrell and he’s not happy about that. So with snarky relationships all round, this is going to get messy, again.

This is a great, intense hour of confrontation; alliances and information (please say this in the style of Zen, the computer). There is a lot to get in and we need a good story as well as the links to the next episode.

I think this works with a lot packed into the time and, as long as you pay attention, you will pick up on the next threads. The original characters are as whip-smart as ever with the dialogue reflecting what we remember about them. Vila (Michael Keating) is suitably whiney and Avon (Paul Darrow) is always ready with his trademark put downs. Blake (Gareth Thomas) still has the fire of a revolutionary. The supporting actors were very good and kept to a minimum, thankfully, but they were good value with Dan Starkey as the uptight Verrell and Abigail Hollick as Alexa. The main rebel is Abel Garmon (looking at your sat-nav for inspiration, Andrew?) manfully played by Tim Bentinck (better known, to me at any rate, as David Archer). Apart from the odd Sontaran moment in Starkey’s voice, it all goes swimmingly and packs a nice gut punch at the end leaving us wondering where we are going next. Onward to ‘Drones’! 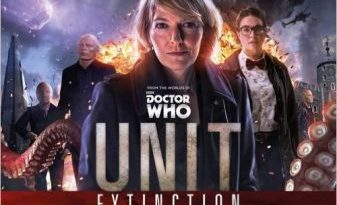 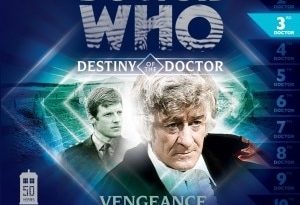 Destiny Of The Doctor 3: Vengeance Of The Stones by Andrew Smith (audio-book review).

Destiny Of The Doctor 3: Vengeance Of The Stones by Andrew Smith (audio-book review).