Nothing makes for a film to get fast tracked than being based off a successful book. In this case, Ira Levin’s ‘Rosemary’s Baby’. Interestingly, it was director William Castle who got the film rights but took up producer status so Roman Polanski could direct it. Interestingly, both Levin and Polanski are agnostic and the latter actually saw the film as a black comedy. 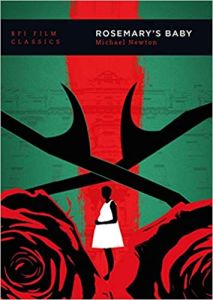 ‘Rosemary’s Baby’ was released in 1968 amongst a lot of other famous films of the time period, although this appears to be the only horror film. I have seen it a couple times over the years. In many respects, it is more urban psychological, slowly getting under your skin as you get to know the people and discover things aren’t what they seem or particularly nice. The Bramford Apartments had an earlier reputation at the turn of the century for witchcraft and various things were putting in place to seduce both Guy (actor John Cassavetes) and Rosemary (actress Mia Farrow) Woodhouse, with the latter being raped by the devil as the other tenements wanted his off-spring. You’ll have to see the ending for the twist in that tail.

Michael Newton’s book explores the film’s history and that of the cast involved. It also won many awards and has been a major influence on more recent films. For such a small book, there is a lot packed in here, including lots of colour photos.

If you are a horror fan then you would certainly have heard of ‘Rosemary’s Baby’ and it is worth a look. Unlike many horror films where you want a nice winter’s night, go for a humid dark summer night and don’t let the knocking at the door from your neighbours who want to invite you over for a cup of tea.