In her introduction, editor Donna Scott vents her ire about a big name literary author who announced he was going to dip his toe in genre waters and write a Science Fiction novel about ‘human dilemmas’, the implication being that the present crew of hacks in the field should be sobbing with gratitude. As she points out, there’s a lot of stuff out already doing that, including the crop harvested here. Some highlights below. 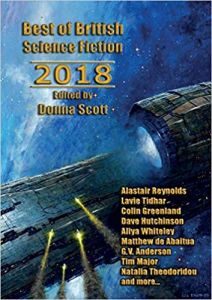 In ‘Talking To Ghosts At The Edge Of The World’ by Lavie Tidhar nearly everyone in the Solar System has a node in the brain and is part of the Conversation, the constant flow of data. Furthermore, the node records everything you say or do and after death can be removed, its data being a kind of ghost impression of you, hence the title. There’s a group called the Disconnected who, nodeless, are not part of the Conversation. Given the way the Conversation is going in our time on Facebook, Twitter etc, I think they may be the happy ones. An interesting theme with a background rich in detail.

‘Territory Blank’ by Aliya Whiteley has a great opening line: ‘Watkin has also been eaten.’ This is from Day 156 of the narrator’s journal and the story skips about through the journal entries thereafter in a non-linear way. Saffron (for it is she) is undergoing a jungle adventure in a dome, a realistic environment built for adventure rather like a ‘Star Trek’ holodeck. The wonderful writing makes this a very immersive experience as you share Saffron’s woes.

Then we’re off to the red planet for ‘Throw Caution’ by Tim Major. Haru Ito and two companions have just arrived at a base where the business is netting sand crabs, Martian desert creatures that each contain a pearl. Haru is more interested in research than loot but, when a storm whisks him away, he makes a great discovery. This was terrific even though I didn’t believe in the sand crabs. Both ‘Territory Blank’ and ‘Throw Caution’ first appeared in ‘Interzone’ which once seemed to be steeped in perpetual gloom but may reward attention now. Therefore, I skipped the running order on the contents page and looked at other Interzone stories.

I was not disappointed. ‘Birnam Platoon’ by Natalia Theodoridou has plant soldiers fighting a war to end all wars and is told from the perspective of a woman facing court-martial. The soldiers were a beautiful concept but I’m not sure how scientific. It didn’t matter and, having recently watched the old SF horror film ‘Phase IV’, I was in the mood for more ants, a desire nicely sated by James Warner’s ‘P.Q.’ Harvester ants in the California desert are behaving oddly, collecting minerals they don’t need to make…art? Great story and it was told, not shown, which made a nice change.

Last from ‘Interzone’ but not least is ‘The Purpose Of The Dodo Is To Be Extinct’ by Malcolm Devlin which follows Prentis O’Rourke as he gets killed at the same time on the same day in a zillion different realities. It’s more of a philosophical meditation than a story but good reading nevertheless. ‘Interzone’ bears watching.

As the title suggests, ‘Golgotha’ by Dave Hutchinson has a religious theme. The Lupo, an advanced alien race, have been visiting Earth for a few years and mankind is careful not to upset them as they’re far ahead of us in technologically. An incident on the west coast of Ireland arouses their interest and one of their number arrives to discuss it with the local Catholic priest, watched by the world’s media. The priest’s careful avoidance of theology beyond his humble rank reminded me of the catch-all excuse used by Father Jack from Channel 4’s comedy series ‘Father Ted’: ‘Ah, now that would be an ecumenical matter.’ Big issues packed into a few pages and very well done.

The same could be said for ‘Salvation’ by Dave Bradley. Humanity has shunned the One Transhuman Polity for two decades but needs help from the A.I. collective when an asteroid strike threatens a mining colony. Maybe this is our future. A different kind of immortality, via clones, is offered in ‘Good’ by Sunyi Dean which pleased me despite the open ending, nay, because of it. Clever.

‘Hard Times In Novo Genova’ by Chris Barnham and ‘The Escape Hatch’ by Matthew De Abaitua are placed together, presumably because they are both about access to a different world but by different means. In ‘Hard Times In Novo Genova’, certain individuals can follow a silver path to multiple versions of Earth but our lovelorn hero is stuck in one. In ‘The Escape Hatch’, a doorway to another world opens completely at random on the A12 and people drive into it and back. De Abaitua’s story was more punchy but they were both interesting and both borderline fantasy rather than SF by any strict definition but never mind.

Android love stories are not new but G.V. Anderson does a variant of the theme in ‘Waterbirds’ with a knackered old ‘fuckbot’ companion and her knackered old owner sliding slowly into decrepitude together. A bad cop and a good neighbour complicate the situation in this low key, touching little gem.

Mike Morgan’s contribution is ‘Buddy System’. By means of a Quantum Entanglement Device invented at FarClose Enterprises, Priya Ichpujani gets to be a miner in the asteroid belt, her brain linked to a robot device while her body stays in a capsule in Mumbai. For safety, she works with a buddy, Mariposa, whose body is also back on Earth. A moving examination of the human impact of technology.

I enjoyed ‘The Whisperer’ by J.K. Fulton for its theme. Technological upgrades keeping rich old people alive but at what point are you so mechanical that you are no longer human? Another issue is raised at the end but I won’t give it away.

‘Rainsticks’ by Matt Thompson is about a genius who becomes a billionaire and has big plans to launch humanity into space, all told from the viewpoint of his disabled daughter. A well-crafted tragedy that makes you wonder how people think when they get that rich and what they think. I don’t subscribe to the view that they are all evil.

Possibly my favourite herein is ‘Death Of The Grapevine’ byTeika Marija Smits about an engineer who goes to fix the AI in a small, independent cafe. Smits weaves in a lot of background information just by relating the conversation between man and machine while he fixes it. SF about the ordinary bloke doing his job reminds me of some of those great little stories by Philip K. Dick back in the day.

I suspect the big-name literary author mentioned in the introduction gets his idea of Science Fiction from the big-name movies. ‘The Best Of British Science Fiction 2018’, Newcon Press gives you an interesting selection of what’s happening in the written field today or at least, last year. Like its predecessors, this is a terrific collection. Enjoy. 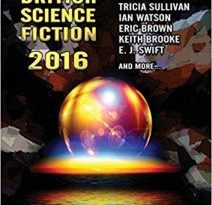 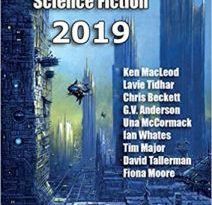 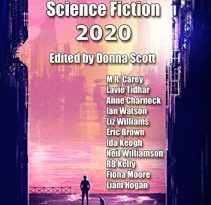