In the introduction by S. T. Joshi reflects as much his literary preferences as the work of American author Caitlin R. Kiernan in stating that she does not describe herself as a horror writer but as an author of weird fiction. The differences between these two genres are debatable and they are perhaps best thought of as two distinct edges of a single broad style of work. Where an author like Brian Lumley or James Herbert unquestionably writes work intended to shock as much as entertain, there are others, like Kiernan, who inhabit the space created by Poe and Lovecraft, where the visceral horror element exists not to shock but to unsettle. 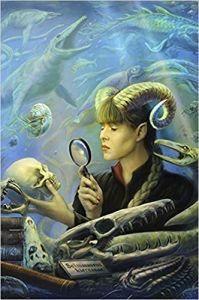 Kiernan is certainly a master of that art and her stories, while diverse, all share the same unsettling sense of alienness. In ‘Fish Bride’, the narrator explains his relationship with a woman undergoing some sort of change, with the maritime setting implying that she will soon leave her lover forever, to live within the sea. There are elements of homage to Lovecraft’s ‘Shadow Over Innsmouth’ here, which Kiernan acknowledges in a short coda included in this collection, but she also describes the story as more inspired by RH Barlow’s ‘The Night Ocean’ instead, a short story Lovecraft co-authored that was rather more about loss and loneliness than racial impurity and alien invasion.

Similarly, while ‘As Red As Red’ is a straightforward vampire story in some senses, with Gothic atmospherics playing as important a role here as they do in Bram Stoker’s original. The New England setting is played to the hilt, particularly in the way the 18th century slave trade is rolled into the narrative. While investigating certain old records, the narrator discovers what was considered at the time to have been an example of vampirism involving a young woman feeding from her sister and mother. This incestuous twist contrasts with the sexually charged overtones of the traditional vampire story and makes Kiernan’s story a less comfortable read.

‘Galapagos’ is a great piece of fiction and almost the one Kiernan was born to write. Her background as palaeontologist gives her the scientific chops to describe modern research in a way that doesn’t feel hokey or superficial, something Hollywood movies often fail to do convincingly. It’s a typical disaster-in-space story in some ways, with an utterly alien life-form killing off the astronauts, including the wife of the narrator, told in a series of dreams and recollections. This mixing of past and present skilfully builds the tension up as the story progresses, as the nature of the threat becomes clearer.

If Kiernan has a flaw, it’s that she’s sometimes a little too accomplished as a writer and the prose slides into indulgence. ‘In The Dreamtime Of Lady Resurrection’, we not only have an impenetrable title but also some slightly heavy going eroticism, For example, I have absolutely no idea what is meant by ‘…through your Circean hands poured the poison draught and then held the spoon.’ To be fair, in the short paragraph where Kiernan comments on this story, she admits that she doesn’t expect everyone to feel the same way about it as she does. But, in a book of generally enjoyably intelligent short stories, this was one that stood out as a bit overwrought.

This collection includes 24 short stories, a novella and a poem, plus codas to each piece where Kiernan says a little about the work in question. It’s an impressive bundle, likely to be enjoyed by all fans of weird fiction, though whether Kiernan is truly the current master of the genre, as Joshi states, is perhaps open to debate. She’s a little too self-consciously post-modern at times, making some stories less accessible than others. ‘The Prayer Of The Ninety Cats’ is one such. It is a retelling of the life Elizabeth Báthory, said to have bathed in the blood of young girls, through a discussion of the surviving fragments of a film of her life. Snatches of the screenplay are mixed with commentaries on censored scenes and deleted sequences. The layering of a metafiction on top of a fiction on top of a myth is clever but Kiernan’s studied sophistication and thick prose do nothing to lubricate what is otherwise a complex, non-linear piece of storytelling.

In short, Kiernan is certainly one of the most prolific exponents of the weird fiction genre and on the strength of this anthology at least, one of the best, if not necessarily the most accessible.