If you thought ‘Bela Lugosi And The Monogram 9’ was a pop group or even a missed Lugosi film, go to the back of the class. Well, sort of. I have to confess I wasn’t quite sure what this book by Gary D. Rhodes and Robert Guffey was all about until I started reading it. 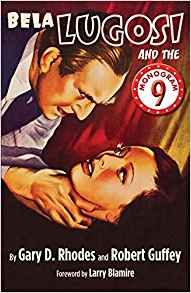 Ten years after Bela Lugosi rose to fame in the 1932 film ‘Dracula’ and one bankruptcy, the smaller ‘B’ film studios could literally get him for a song so the film studio Monogram had him for nine films, hence the title. Considering the speed these films were put out, the writers point out that it was more surprising when any director did anything good.

I was curious to see how many of these 9 films were available on DVD and although a bit more limited on our side of the pond, they look like they are all there for you to track down if you use their individual names. Considering the number of black and white photographs shown, it’s pretty obvious they aren’t altogether relying on second-hand sources.

When it comes to film director influences, I do raise my eyebrows. Yes, films in the 1930s onwards were fairly easy to go and see in the cinemas but for any director to get a serious influenced by them, then they would need to repeatedly view the ones they deemed major even for osmosis to seep in. I would be more inclined to believe, especially with the ‘B-level films the directors just chose similar tactics to get them in the can and only talent distinguished between them. How much did even the Monogram 9 films influence future modern directors is even harder to say considering their lack of availability until DVD release.

The writers point out that Lugosi only played 6 types of roles but when you consider how some lead actors today do only one role type, that’s still more than most. Of course, Lugosi with his thick Hungarian accent and hypnotic stare and forever ‘the outsider’ was going to be cast far more in horror films than any other genre. Looking at the Monogram list, at least he had a couple thrillers added to the mix.

Without seeing them all, it’s a bit hard to criticise or comment on what they write here but I think you’ll find this book will encourage you to seek them out if you want to see some of the later films in Bela Lugosi’ career.