‘Behind The Sofa’ is a collection of celebrity memories of ‘Doctor Who’ from the last 49 years. Memory being a funny thing, who’s to know whether these are accurate, but 100% of the royalties are being paid to Alzheimer’s Research UK so please buy if you can.

There are a variety of stories from the BBC Controller Michael Grade who was responsible for cancelling the show in the 80s (boo, hiss) to celebrity fans, young and old. There is something here for everyone… and I was surprised how many fans of ‘ Doctor Who’ have come out of the cupboard. Of course, it’s more fashionable to be a fan now than it ever has been. You can open this smart hardback at any page and find a little nugget. There’s Jack Thorne who grew up without the Doctor and became a fan at 26. Jack wrote the underrated ‘The Fades’, so he knows what rejection is like. You can find out why Neil Gaiman wishes he had a scary monster in his episode. Graham Duff tells us about a lost world when, if you missed Saturday night’s episode, you missed it forever. Dark times indeed,

This is a brilliant book because it has been put together with kind thoughts and good intentions. Every little story tells us a little bit about why Doctor Who means so much to so many people.

Some of the memories will make you laugh and some will make you cry. It’s not necessarily the sad stories that bring a tear to the eye, either. I refer you to page 64.

This has taken editor Steve Berry four years to compile it in memory of his mother Janet, who suffered from Alzheimer’s. A lot of time was donated by generous helpers and it’s been ‘crowd-funded’ as well. Buy it now.

Contributors include comedians Al Murray, Stephen Merchant, and Bill Oddie; actors Lynda Bellingham, Nicholas Parsons, and Rhys Thomas; writers Neil Gaiman, Jenny Colgan, Jonathan Ross and Charlie Brooker and politicians Louise Mensch and Tom Harris. In addition, there is input from a number of the writers, actors and production staff who were involved in creating Doctor Who stories new and old. 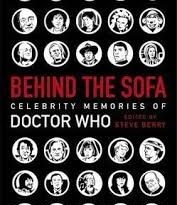 Behind The Sofa: Celebrity Memories Of Doctor Who edited by Steve Berry (book review).

One thought on “Behind The Sofa: Celebrity Memories Of Doctor Who edited by Steve Berry (book review).”

Behind The Sofa: Celebrity Memories Of Doctor Who edited by Steve Berry (book review).