‘Bards And Sages Quarterly’ is a small press speculative fiction magazine that publishes stories up to 5000 words in a variety of genres and styles and pays a fistful of dollars to writers. Only a small fistful but it’s all welcome and no one does short stories for the money. 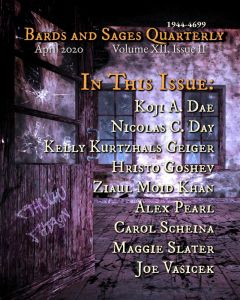 These are some works that I liked:-

The opening fiction is ‘Moni Baba’ by Ziaul Moid Khan. Initially, what seems to be an omniscient narrator tells us about Moni Baba, a clerk in a government department who decided he was a holy man and retreated to a hut just outside the village. Near the end, the narrator is revealed to be a poet who lived in the village. I enjoyed this old-fashioned recounting of the tale, reminiscent of Conrad and it was a pleasant, undramatic read.

The second story, ‘Imago et Umbra’ by Hristo Goshev is a complete contrast, a space opera. Nick’s a fighter pilot bored with peacetime missions since the end of the war against the Destroyers. An installation at Riviera 2 has picked up signals of undetermined origin in the system’s outskirts and he’s sent to investigate with his best mate, Max. I won’t spoil the plot but this was an enjoyable mystery with a good space battle and a bit of true love mixed in. The background set up of humans fearful of another alien attack was well realised.

‘Like Grandma Made’ by Carol Scheina has the interesting notion of a temporal grocer’s licence which allows the holder to go back in time for food. Opening line: ‘The year 892 was fantastic for apples in England.’ Allie wants to get the ingredients for a special recipe but is plagued by a nuisance customer who wants a dodo. An amusing piece and a clever take on the possibilities of time travel.

‘Betrayal Bond’ by Alex Pearl is a quirky story about trust. The lead characters are a pair of ‘screwoverphiliacs’ just leaving a sinking ship. They sank it. The loathsomeness of these two, who met spitting on food in a McDonald’s, makes the tale unpleasant but I can see the point of it and the plotting is clever.

By complete contrast, ‘The Open Source Time Machine’ by Joe Vasicek is pure joy, one of those 1950s style tales about a lone scientist trying to get funding for his time machine from hard-hearted corporate executives. Having fun with time travel is one of the oldest SF pastimes and this is a very nice example of the sub-genre.

‘The Miracle Of Jane’ by Maggie Slater is an immersive piece narrated in the first person by what I assume is a sentient ship that was once human or something similar. It has landed on a moon. It’s mission is to spread life by growing seeds it carries which become people, including the Jane of the title. The theme is sowing life among the stars is not new, but this treatment makes it warm and real. A lovely little piece.

So, in a different way, is ‘The Tantrum Particle’ by Nicolas C. Day. Doctor Baldric Von Tinkleberry, genius, is in charge of a secret government project to harness the power of the most energetic force in the universe: toddlers! Colonel Max Little, lover of polished medals and shiny brass buttons visits Von Tinkleberry’s top secret laboratory under a nursery in Niceville to assess his success. Many nice humorous touches in this joyful tale.

Unlike many small magazines which have exclusive deals with one big retailer, ‘Bards And Sages Quarterly’ is widely available as an eBook. I bought mine from Smashwords but you can pick your own favourite as they have a books2read link when you click on the issue at their website. A good read.