The Warhammer 40000 universe is a grim unforgiving place where the only certainty is war and death. Humankind is beset on all sides by aliens so they fight and, in ‘Baneblade’, they fight the Orks. A highly warlike race, Orks are huge muscle-bound creatures that make up for their lack of outright intelligence with cunning, numbers and a knack of being able to convert and use anything they acquire into weapons. Humans use almost forgotten technologies to provide them with an edge against the vast numbers of Orks. One of these is the Baneblade, a huge tank armed with a plethora of weapons. The book opens with the creation of the Mars Triumphant, the Baneblade of this novel. It’s more of a birth than a creation as the tech-adepts chant and perform sacred rituals as each weapon is fitted and blessed. This is all part of the religion that worships the almost dead Emperor. His rotting carcass sitting immobile on the Golden Throne is kept energised with arcane technologies.

In the Warhammer 40000 universe for humans there is only the Emperor who looks after all his faithful followers. However, the tech-adepts and cyborgs that are making the Baneblades invoke the machine god Omnissiah to watch over and give life to their creations. Each Baneblade tank has its own machine spirit, which the tank commanders and crew talk and plead with. This simmering conflict between the devout worship of the Emperor and the almost witchcraft interaction with the machine spirit makes for an interesting contradiction.

The story proper gets going with a battle on the desolate, barren, desert world of Kalidar. Mars Triumphant, captained by Honoured Lieutenant Cortein, is part of a two-pronged attack on an Ork stronghold. At the time of the story, Mars Triumphant is estimated to be over a thousand years old, been captained by many distinguished people and survived many battles. During the current battle, we are introduced to the other main human character of this story, Lieutenant Lo Bannick. After his own smaller tank is destroyed, Bannick is assigned as third gunner to the mighty Baneblade Mars Triumphant.

Bannick has a murky shameful secret in his past that is revealed in a series of flashbacks throughout the book. I’m not quite sure this format worked, as it tended to interrupt the on-going drama of the story’s current time which, to be honest, was quite exciting. Guy Haley certainly writes with a flair for action, which is the main selling point of any ‘Warhammer 40000’ book.

The story could be distilled into two story threads. Firstly, we have the story of how Bannick faces up to his inner demons to serve the Emperor and, secondly, how Mars Triumphant takes on a terrifying construct of Ork ingenuity and witchcraft. These stories become intertwined and for each to succeed they depend on each other.

‘Baneblade’ is an enjoyable read for any warmongering person. As a standalone novel, you don’t need to be familiar with the Warhammer 40000 universe. You simply need to relax, open the page and let battle commence. 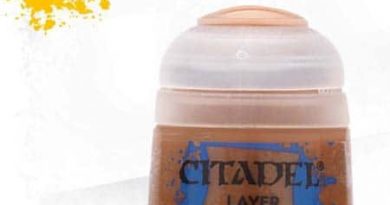