For Back Issue # 111, the subject is alternative realities. As we’re already in an alternative reality where super-humans are the norm, this does need more elaboration? A little. For Marvel, it is a look at their ‘What If…?’ comicbook series exploring alternative choices wiuth the Watcher as host to what really happened in their reality. The precursor to this is DC Comics ‘Imaginary Stories’ where they play around with plot ideas that they couldn’t do in their regular reality…well, not until much later. You know the ones, like Superman marrying Lois Lane and their various off-spring.

Oddly, there is no mention of a future Superman whose weakness was water and not kryptonite which must have made things interesting when he needed a wash. Likewise Gardner Fox conjuring up alternative endings to Batman tales to match the cover. In fact, Detective Comics # 347 was one of my earliest American comicbook purchases and encounters with their imaginary stories and felt it a bit of a cheat. Anyway, that’s more to say I’m more than familiar with the subject. As to why I read them, I blame low prices and comprehensive reading. Mind you, you do have to ask why fans find them so popular.

Thinking about that, I suspect that not also having the heroes win all the time made a difference from the standard plot. The comicbook companies must have learnt something from that when you see the carnage and death today. 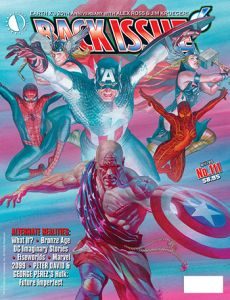 Jarrod Buttery’s extensive look at ‘What If…?’ comicbook series is very comprehensive with a lot of anecdotes about producing what is literally a bi-monthly annual-size comicbook and brought back a lot of memories.

John Wells’ look at DC Comics’ imaginary tales does throw some more information about which editors like to play with this concept in the 1960s and who didn’t. My missed examples above probably illustrate how difficult it is to be totally comprehensive if you can’t remember them and I suspect those of us who read the comicbooks in this time period will have different memories as well. What Wells does illustrate is how many were used for comedic effect.

Charlie Boatner looks at Alan Moore’s Superman stories where he does these imaginary tales as well. He does miss out on Moore’s comment as to what is an imaginary reality when all the stories are imaginary, although Ed Catto points it out further in with his ‘Elseworlds’ article.

I think Peter David and George Pérez’ ‘Incredible Hulk: Future Imperfect’ happened just after I got out of comicbooks but reading Jerry Smith’s interview with them here about the two-parter. It’s now on my ‘to read’ list now if only to see more of the future museum.

Ed Catto looks over DC Comics range of ‘Elseworlds’ versions of their universe. Apart from supplying a useful history, if you missed any or wanting to pick out some to investigate, then this article is worth a read, more so as it includes comments from various creators who were involved in it.

I’m not sure how alternative the ‘Marvel 2099’ reality is as it is supposed to be a century later in the Marvel Universe. I suppose we ought to wait until 2099 and see if there is a resurgence. Seeing how hands-on Stan Lee was with these titles at the start and then under the control of editor Joey Cavalieri keeping it going for a couple years. Lack of sales finally did this reality in but considering how the whole comicbook industry turned into a slump in the mid-1990s, it was inevitable that it would become a casualty.

Several years ago, I pulled a copy of the limited edition of the Graphitti Designs edition of ‘Earth-X’ mostly because of Alex Ross’s art. There’s a lot of it in the book but thought the comicbook story, originally spread over a 14 issue mini-series, illustrated by penciller John Paul Leon and inked by Bill Reinhold a bit yukky and have still to get around to reading it. Reading the article here by Eric Bresler, the interview with Alex Ross reveals it had been a mistake not to have them as colour pages.

Seeing the entire history of ‘Earth-X’ as what happens when Marvel heroes age being their answer to DC’s ‘Kingdom Come’ with Alex Ross being the common denominator after he did some demonstration pieces for Wizard Publications. It’s made me have a serious think about whether I should read it but I think I’ll have to grab the colour version as digging it out, I’m still not that impressed by the art. Alex Ross’ designs really did need as good an artist in my opinion.

As always, ‘Back Issue’ theme explorations will give you a lot of knowledge and even suggestions as to what to read and this issue is no exception. As you can tell from my comments, it’s also drawn up a lot of memories for me as well. With the multiple realities at both DC Comics and Marvel Comics now, this issue can also be seen as a source of how did it start and get so out of control. 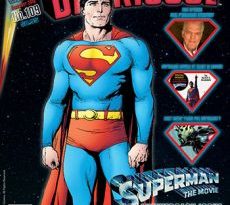 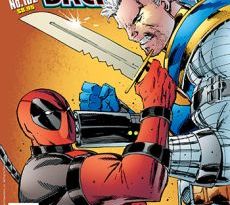 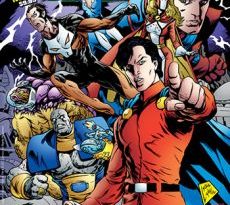