You can’t say ‘Avengers: Age Of Ultron’ doesn’t start off swinging when the team go into battle against a key Hydra unit who rely far more on their technology than the two Maximoff siblings to attack them with. However, it is the aftermath when Tony Stark investigates the Staff of Loki and discovers that its crystal holds a computer artificial intelligence and coaches Bruce Banner to help him put it in robot body that you can see where the problems are coming from. It’s the ‘Age Of Ultron’, who do you expect to appear? Machine Man? Mind you, Ultron getting the Hulk to turn against the team to ensure a street-ripping battle is one sure way to get the normal population against you. Having been severely beaten, the Avengers retreat to Hawkeye’s family ranch to lick their wounds and decide what to do next. Quite why Hawkeye take these powerful super-heroes to his family home/farm and think it won’t endanger them escapes me? This also slows the film down considerably for some ‘character’ moments. Not saying that they shouldn’t have a chance to talk to each other but it slows the pace right down.

In many respects, this team doesn’t act much like a team. Granted, Thor has to go on his own to consult his own people. Tony Stark only confides in Bruce Banner when it comes to creating the Vision and even the latter has some doubts. Then it’s all together for one almighty confrontation with Ultron and may the best country survive untouched.

Some areas, like the creation of the Vision are using elements that are already there which have vague connections to their comicbook resources. In the tradition of film adaptations, no super-heroes are going to be like the originals.

With the second Avengers film, I find myself focusing more on particular aspects. In the original comics, it was Hawkeye who was the brash wise-cracker but here it is Tony Stark/Iron Man as that has been previously established in his own films. You would think it would have been possible to have two similar mindset conflicts if for no other reason than to elevate Hawkeye’s own position in the team and he really does come over more lovey-dovey than brash. I mean, you’ve got to have some attitude when all you really are is a human archer and the weakest member of the team.

The team order is likely to be different for the third film, whether by contract, availability or whatever. When you have so many powerhouses working together, the villains never have a chance and that is why even Stan Lee changed the team in the good old days to something a little less powerful. That and the fact that they were also in their own titles which was messing up continuity. The Avengers does need some vulnerability if it is to succeed, especially after this film.

The solo audio commentary by director Joss Whedon reveals the movie took 150 days to film, with the help of his second unit director taking 50 days which I presume was concurrent with his own.

Something I hadn’t realised was Whedon saw Tony Stark as the villain whereas I saw him as just making mistakes. Technocrats do have a tendency of getting carried away without realising the implications. Likewise, I tended to see the fact that the Vision could lift Thor’s hammer was because he/it wasn’t human than being worthy, at least in the comicbooks. I have a vague memory of Thor’s hammer being picked up by a machine in his own comic back in the 60s. Mind you, as this version of the Vision has some contribution of Thor’s own asgardian energy in him/it being powered up would have had the same ‘worthy’ element.

Saying that, I was less surprised at the number of films Whedon referenced for particular moments in the film as I know he’s a film buff. I don’t tend to think of it as homages but more from the point of view that he couldn’t beat them but use the understanding of the meaning.

The main other extras show a behind the scenes making of documentary and just how much of the Avengers headquarters was green screen. On top of that, we go on location with them across the world and looking how helpful South Korea was, I have a feeling that market will open up for other big films. Considering how Mark Ruffalo and James Spader wore motion capture suits for their performances, I was surprised that Paul Bettany hadn’t for his part as the Vision as he had the full rubber appliances and then computer enhanced. Maybe they were experimenting with merging the two mediums together.

Speaking of which, ‘The Infinite Six’ shows more Thanos than the inserts in both films and the overall picture (sic) where ‘The Avengers’ franchise is heading. I wonder if the Vision is worried about his own fate should Thanos take the jewel from his head? I do hope that they keep some of the other owners of the Infinity Gems in the storyline. I’d love to see what they do with the Stranger.

You can see where the budget went in this film and undoubtedly has got it returned in a similar way to the first film so I doubt if it will ever have the sequel not making as much money problem. I’m less ambivalent about this film compared to the latest X-Men film but that’s only because they’ve stayed closer, to some extent, to the original template. Certainly for super-hero team films, it’s set a very high standard that will be hard to equal. 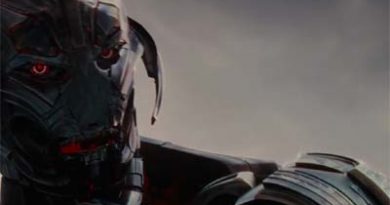