There is a war going on between three powerful angel siblings, Raziel, Lucifel and Israfel. This has divided the kingdoms of Heaven and Hell and their war is spilling over into the world of the humans on Earth. 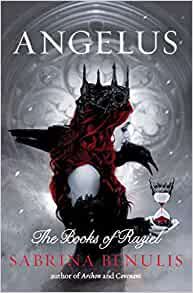 Only the Archon can stop this war from destroying everything. The Archon is in the human form of Angela Mathers. In this the third volume, ‘Angelus’, we find her in Hell on the devil’s throne without her memories of who she really is. Which is a problem as it is only Angela as the Archon who can stand up to and actually oppose Lucifer. To do this she has to open the Book of Raziel and unleash the power for good.

Nothing is as simple as just opening a book. It isn’t a huge tome requiring mystical spells, against the wards put on it, to allow her to open the book and recite the spells. No, life isn’t that simple at all. The Book of Raziel isn’t even a book, it is a person, a very close friend of Angleas called Sophia, who is actually much older than she seems.

Then there’s Anfelus, the song of creation that Sophia sang to retrieve Angelas’ memories of her past life as an ordinary person, a student in the town Luz, which started Angela on her quest to leave Hell and get back to Earth in her hunt or for a different solution she also visited Heaven. Angela must create a new song, one of revolution, of regrowth not of destruction.

As already mentioned there is a lot going on in this book. It was already a complicated, multi-layered story. As this is the finale, we need loose ends tying up and a resolution to all the trauma and warfare.

You will have to read thru this book to find out whether it all ends happily or not. This is a story to get totally engrossed in, a dark page-turner to sink your teeth into. Highly recommended

check out websites: www.harpercollins.com and www.sabrinabenulis.com