I knew last year that Jim Shooter was going to be interviewed in Alter-Ego # 137 and was part of the reason why I was pushing publisher John Morrow that we really should be reviewing their magazine output. After all, there are a lot of significant names in comicbooks but Shooter still holds the distinction of being one of its youngest age starters, raising the profile of the Legion Of Super-Heroes at DC Comics and a nine year tenure as editor-in-chief at Marvel Comics. Things are often written about him but interviews are a lot rarer. This issue has a 29 page interview with Shooter where you get an insight into his written work at DC Comics, chiefly with ‘Legion Of Super-Heroes’, from the age of 13 to his later work at Marvel briefly but not earning enough to live in New York before he thought he burnt his bridges and went back to Pittsburgh and into advertising. Despite his problems with editor Mort Weisinger (and from all accounts, everyone had problems with him), Shooter was taught all aspects of this business and, I suspect, inadvertently not to go the Weisinger way of brow-beating people. Think of the consequences had he been like Weisinger.

When he was found and brought back to work at Marvel under the title of ‘Associate Editor’, he was supervising 45 titles but was ultimately at the end of a list of those selected who became editor-in-chief and then lasted 9 years, changing a lot of things but ensuring the creative people got paid well. When, after Stan Lee, these other people lasted anything from a couple weeks to a couple years, I always saw that as a major accomplishment myself. He points out something that both Marvel and DC forgot about was to still keep servicing the newsstands which is why kids in America don’t have a love of comics but only dollar signs these days.

I know some of the now older creators in the USA have problems, mostly stemming from him insisting they keep to deadlines because of the expense of missing them with printers schedules, with Shooter and he’s been frequently demonised in the fan press but reading this interview shows a lack of ego, more so when you consider all the snide things have been said about him in the past. As Shooter points out himself, the one thing he had in his favour was he knew the business end of things while the others, if they knew it didn’t like dealing with it. His tenure at Marvel ensured the creative people got paid well for their work based on sales and keeping to deadlines.

If anything, I wish interviewer Richard Arndt had kept going but this interview would have gone on for a lot longer. I hope the editors at TwoMorrows other magazines pursue Shooter for his thoughts on their specialised subjects. After all, when he started writing for comics he didn’t even knew the text way and just did layouts and script but showed he could tell a story and stayed that way for 4 years before writing scripts. He even regularly drew two cover layouts for the LSH in ‘Adventure Comics’, where one became the cover and the other the splash page. None of which was paid for and you can see when he edited at Marvel, he never wanted anyone else to have that situation again. I can see a lot of his motivations in this interview and so much of it was for other people. Being an editor myself, I know the problems of the role so I could always see both sides. If you’re going to buy a magazine about comics this month, make sure it is this one.

That’s not to say this is all in this copy of ‘Alter-Ego’, there is also the third part of a look at the career of artist Dan Barry. About the only observation there is its writer, Alberto Becattini has never seen the 1970 film ‘Two Mules For Sister Sara’ in relation to the comic strip ‘Slim And Nun’. There is also a tribute to the late artist Herb Trimpe, who died last year. An interesting observation from Stan Lee was that Trimpe was a better storyteller than artist and I actually agree with.

There is also a look at the first New York Comicon and some of its survivors from 1964. Of special interest amongst the photos is a very young George RR Martin. I wonder what happened to him?

The extended letters page, after missing an issue, is quite enlightening, especially to a practice done in 1960s DC Comics where editor Mort Weisinger would rubbish a new character name/suggestion but then bring it out as if it was their own a few months later. I did have a think about that and wondered if this policy was done to ensure DC owned the copyright. As editor Roy Thomas points out, there might need to be a rethink on who came up with the names of many characters.

Finally, there’s a look at the UK comics of the late 50s-early 60s reprinting ‘The Marvel Family’, that’s the Big Red Cheese variety than comics. I missed most of these in my tender years and not really sure if they were that well distributed in Somerset. The later ones that were, being square-bound weren’t really put on the comic-racks and so might have been missed when they were hidden away in a corner.

Oh and a happy 75th birthday to ‘Alter-Ego’s editor Roy Thomas. I grew up reading his stories and its always great to see him pursuing his interest in the older comics. If you’re of a certain age or even younger and want to learn more about the history of comicbooks, then ‘Alter-Ego’ deserves to be on your shopping list. 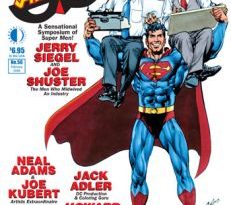 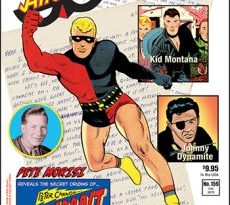 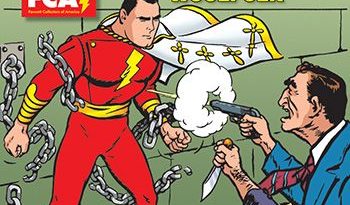