From the start, I am reading ‘Alien: Covenant: The Official Collector’s Edition’ prior to its disk release let alone seeing the film. As that won’t be until the autumn at the earliest, I’m assuming the regular selective amnesia will take effect for me not to dwell on what I already know. There are snippets of the plot revealed in this square-bound magazine but not the entire synopsis. Much of this book is focused on interviews with director Ridley Scott, the cast and people from production. With the latter, interviews with director of photography Darius Wolski, production designer Chris Seagers, head armourer John Bowring and costume designer Janty Yates. From the way actress Amy Seimetz describes events in her interview, they were still filming so none of them have seen the final film when they were talked to. Of course, that could vary as to which and how many survive through the entire film. That’s a lot of interviews nevertheless. I’m going to be careful about how much I reveal here in case you’re waiting for the disk release as well. Ridley Scott does reveal that there will be two more films after this one. No doubt building up to the time period ‘Alien’ starts. Logistically, no messages ever get back to Earth or any of the other colonies of encounters with extra-terrestrial life so presumably no one puts together any evidence other than mishap and failure so is in keeping with the earlier/future dated films.

The main crew of the Covenant awoken after a problem in space is down to fifteen people. Thirteen human couples and one synthetic which is a big cast to keep track of for just over two hours film time. At least the other two thousand colonists as cargo are left hibernating in orbit. My concerns for the crew are that so many have to be cannon-fodder so you don’t really get to meet them until…well, here really. This book will be useful for giving you all their names and relationships. I would have thought it might have made things easier to only have awoken half of them at the start to assess the situation and then given the impetuous to keep their partners safe from danger. What is odd is none, apart from the synthetic have first names. Do married couples call each other by their surnames in the future?

There’s sufficient photographs of crew and special effects for identification and to whet your appetite. I did find it odd that the text for the photos to be given in a low key blue and hope no one is colour blind trying to read them or trying to in poor light. It’s also a bit of a puzzle as to why the opening page with photos in each section has to wait for the next page for the info. I assume this isn’t Titan’s fault, as this book came out under Dark Horse’s imprint as well. It isn’t as though some photos have text on them.

The cast interviews give some insight into how they see their roles, the look of the sets and working with Ridley Scott. Even so, it’s so neatly done that although you can pin-point the first victims and fates, you aren’t given much else. I should also point out that the photographs aren’t particularly gruesome so if your under-age sprogs get sight of this book then they shouldn’t get nightmares.

Does this book make me want to see the film? I think I would have watched it anyway but at least now I’m a bit more aware of who the characters are which I wasn’t before and that’s the whole point of these square-bound film magazines in the first place. At least I now have a reference guide when identifying cast, unlike ‘Prometheus’. 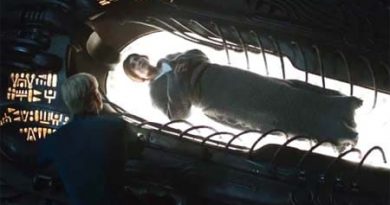