I should point out that as it appears that the 1941 Republic series ‘Adventures Of Captain Marvel’ is out of copyright and available from a variety of companies. I pulled this copy from tripdiscs but there are over companies to pick from even if I can’t speak for them. So the series is from 1941, I’m nothing if not up-to-date.

Billy Batson (actor Frank Coghlan Jr.) is part of the Malcolm Expedition investigating the Valley of the Tombs looking for artefacts of the Scorpion Dynasty. The local inhabitants aren’t happy but Malcolm’s party sneaks in early evening. There, they find a notice warning them not to search further and only Billy heeds this. Wandering the tunnels, a vault opens and the wizard (actor Nigel De Brulier) tells him he must protect the golden scorpion and how to become Captain Marvel when needed. What was that word again? 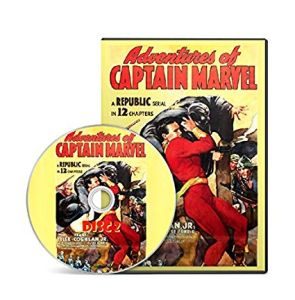 Meanwhile, the expedition put the lenses of the Golden Scorpion together and with sunlight finds it can turn things into gold. Not trusting any one person to have it, they spread the five lenses between themselves and the scroll for Billy later as he is the one person who can’t read it. However, there is an explosion and the locals steal the scorpion and leave them unconscious blocked in. Billy returns and saying that particular word transforms into Captain Marvel (actor Tom Tyler) who removes the block before changing back. There are further battles before they return to the USA.

Here is where we meet the key villain, the masked Scorpion, who is revealed to be one of the expedition. I have my suspicions of which one but not his name as it takes a while to associate them to the role. Anyway, when one of the expedition is captured and has to send the combination of his safe to his secretary, Betty Wallace (actress Louise Currie) to get his lens, Billy gets involved and with pal Whitey Murphy (actor William ‘Billy’ Benedict) try to thwart the plan. Things don’t go quite to plan but he pursues the villains to rescue Carlyle.

It would be too easy to give a blow-by-blow account. Unsurprisingly, Frank Coghlan Jr. gets more screen-time and dialogue than Tom Tyler. Often it’s the perils of Billy Batson with a dash of Betty Wallace in trouble from time to time. One odd puzzle is when Batson is tied up and put in a basement vault why would they think to gag him? I mean, who can he call? It isn’t as though they know about the magic word. The biggest surprise in a fight was Captain Marvel throwing a felon off a high roof so essentially he committed murder. This is compounded later when he throws one unconscious felon into a lake and doesn’t rescue another one who falls in. There’s an interesting continuity glitch when a town house suddenly becomes a small block tower.

Not sure I’d want to on the ship the remaining members of the Malcolm Expedition goes on when the captain or his second-in-command doesn’t spot neither Batson or Betty left the sinking boat. Then again, no one questions how Captain Marvel always seems to pop up when anyone needs rescuing and so well-informed. No one seems to wonder if he’s a disguised member of the expedition. You’ll need to watch to see what happens next.

Other than the opening 32 minute episode, the rest are about 17 minutes each but if you take away the brief recap and repeat of the last minutes of each episode and credits, about quarter of an hour each. The opening episode setting should look familiar to those who’ve watched the original ‘Star Trek’ series.

The Captain Marvel effects depend on flying dummies and decent stunt work and quite effective for its time period. It also predates the ‘Superman’ serials and no wonder that National Periodicals were irked. Captain Marvel’s costume is pretty basic but effective.

Odd thing. Which of the people associated to the letters of Shazam can actually fly or invulnerable to gunfire? If anything, the movie serial has more in common with a certain Man of Steel than the comicstrip.

Trying to work out who the Scorpion is should keep you guessing, more so at the remaining three men all have shifty eyes. It is cryptic enough to keep you guessing to the end. I’m not saying the series is perfect but it is fun to watch even if it’s just for Batson’s eagerness and being smarter than the rest of the expedition. Now, what was the magic word?