‘Acorna’s Triumph’ is part of a series of science fantasy novels started as a collaboration between Anne McCaffrey and, originally, Margaret Ball. From volume three, Elizabeth Ann Scarborough took over from Margaret Ball. Anne McCaffrey is the creator of Pern and author of ‘Dragonflight’ and its many sequels as well as other popular series. There can be few fans of SF and Fantasy who have not encountered some of her books.

Elizabeth Ann Scarborough may be slightly less well known, an easy feat next to McCaffrey, but is a well-published author in her own right having published fantastic fiction for the past 40 years. Her best known work may be ‘The Healer’s War’ which won the Nebula Award in 1989. 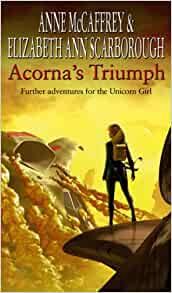 McCaffrey and Scarborough have collaborated many times and are clearly well practiced working together. This reviewer has read plenty of McCaffrey and is familiar with her signature style. The addition of Scarborough does change the style slightly but it is hard to see where one author’s work ends and the other begins such is the skill with which the writing is blended.

A quote on the back of the book notes “…and a decided sense of menace…”. This is interesting as a criticism of McCaffrey’s writing might be that antagonists are really not all that threatening. It is almost as if McCaffrey writes such beautiful characters that she can hardly bring herself to create a nasty villain. Often the villain of the piece might be a nebulous phenomena such as thread from Pern. Otherwise, it might be something so inhuman that its frame of ethical reference hardly applies such as the insectoid Khleevi from the Acorna sequence. Could the blurb be aware of this and be trying to convince the prospective reader that this time there really is a threat?

In this reviewer’s opinion, this issue is the main criticism of this book. As a sequel volume to the previous series, it scores highly as it seems to tie up a plethora of loose ends. Unfortunately, this means that the book, as a whole, is comprised of sections each of which wraps up a long lasting story. The overall whole is held together by a tale involving the return of Aari who is the heroine Acorna’s love interest and who has been using a time machine to right endless issues in their home planet’s history. Aari has been absent for a couple of volumes and his reappearance is a cause for joy amongst most of the characters but Acorna herself is not so sure.

The individual sections generally are nice short stories that are quite fun to read. Each one includes characters from previous books and revisiting them is fun. The authors clearly know how to put together fun little tales and segue them together smoothly. Thus, even though the book feels like it is in sections, it does flow well from scene to scene.

The main antagonist in this book isn’t really evil but more curious and cold-hearted. This character is also contradictory claiming to be highly empathetic but displaying a remarkable lack of empathy. The aforementioned sections which tie up the loose ends all tend to feature a different minor antagonist. As such, we don’t get very much of the main villain and so they never felt like much of a threat. Even the vaunted Khleevi teased on the blurb as “…determined to take back the planet – for good.” failed to provide more than a chapter of threat and honestly never looked even remotely like they can return. Oh well.

Because this book ties off the loose ends, it does feature a diverse cast of characters from previous books some of which date from the very first volume. Therefore, because McCaffrey writes such deliciously rounded creations, I think that fans will enjoy it because the book is absolutely stuffed with great characters. This volume does put a good ending on all the characters I am aware of in the entire series.

Those revisited in this volume include Calum Baird, Declan Giloglie and Rafik Nadezda who were the three miners who found and adopted Acorna in the first volume. Also revisited are Rafik’s Uncle Hafiz Harakamian and his wife, Karina, Captain Becker and his on-off companion Andina, Mac, RK (Roadkill) and the rest of the Condor’s crew. We even get Vaanye and Fariila who are Acorna’s parents last seen blowing themselves up to avoid capture by the Khleevi in the first chapter of the first book. This list is hardly definitive and many other supporting characters from previous books get at least cursory mentions.

The appendix serves up a glossary of terms which doesn’t seem to be very necessary to myself but some may find it helpful. Also included are some notes from Margaret Ball who was the co-author of the first two novels on the Linyaari language. These are mercifully concise. I feel it is worth mentioning the cover on the paperback edition as it is a lovely Fred Gambino picture. I have always appreciated artwork on covers and lament the modern approach to composite artwork. If only more books commissioned artists to provide covers then the world would be a happier place for me at least.

I cannot recommend reading this book in isolation. For the reader of the previous volumes, this is excellent fan service and does serve to finish off the sequence. Although I understand there is a spin-off sequence concerning Acorna’s offspring so fans need not fear that there will be any more to the story. I personally enjoyed it quite a lot but I have read several of the previous books. I think that if the reader knows and likes either author’s previous works then they are going to find enjoyment in this volume. But I recommend starting with the earlier books so as to get the maximum out of this novel.