‘Acorna’s Rebels’ is part of a series of science fantasy novels that started as collaborations between Anne McCaffrey and Margaret Ball. However Elizabeth Ann Scarborough has been the co-author since volume three and so in reviewing book six we must consider the latter author. Anne McCaffrey, of course, should need little introduction. She is the creator of ‘The Dragonriders Of Pern’ which is a series so popular that it has outlived its author with Anne’s son Todd helping towards the end.

McCaffrey has also authored numerous other series including both ‘The Tower And Hive’ sequence and ‘The Crystal Singer’ books. Indeed, McCaffrey has also collaborated with Scarborough on a number of books outside of the ‘Acorna’ sequence so we are looking at a well-practiced writing team here. Elizabeth Ann Scarborough is a very well-established author in her own right, having published fantastic fiction for the past 40 years. Notably Scarborough won the Nebula Award for best novel in 1989 with her book ‘The Healer’s War’. Personally, this reviewer is unacquainted with Scarborough’s work but some quick research suggests she is very much in harmony with McCaffrey. Many of the ideas clearly came from Scarborough. A quick check of her work shows titles such as the nine ‘Tales Of Cats’ series which one could easily suspect at least shows some similarities with elements in ‘Acorna’s Rebels’. Clearly, she is a good fit to collaborate with McCaffrey.

If there is one universal view of McCaffrey it is that she writes books that are hard to put down. McCaffrey’s writing is so approachable and easy-going that she is universally popular and a great starting point for inexperienced readers wanting to try the genre out. Of course, there has always been some debate over exactly which genre McCaffrey writes in. To a lot of critics McCaffrey writes fantasy. Heroes and importantly heroines riding dragons across another world’s sky and magic unicorn girls with telepathic abilities and all-powerful healing certainly feels like fantasy.

But McCaffrey often insisted she was writing Science Fiction. Yes, her protagonists get to their fantastic worlds via faster-than-light spaceships and yes she has written that the dragons were the product of genetic manipulation. Alas, actual science does not underpin these assumptions and so I settle on the unsatisfactory genre of science fantasy. Basically if you think ‘Star Wars’ is Science Fiction then you will find McCaffrey’s writings to be similarly so.

McCaffrey’s writing is so slickly accessible that it is easy to detect for the experienced reader. I can easily detect this in ‘Acorna’s Rebels’. The effect is slightly watered down here by Scarborough’s contribution which seems to ground the writing somewhat but the two are sufficiently blended that the effect is not stark. This book slides into your imagination almost as easily as ‘Dragonflight’ ever did.

The actual story picks up with Acorna who is the unicorn girl of the title. As mentioned above, her people have telepathic ability and mysterious all-powerful healing delivered via the medium of their horns. Acorna has recently been instrumental in defeating an interplanetary menace that has ravaged her home-world and she is busy directing the rebuilding. Clearly, much has gone before but the authors soon whisk her off on a spaceship with various likeable characters to involve Acorna in a new adventure.

One of these characters rather oddly named Roadkill and usually abbreviated to RK is a lynx-like cat with telepathic abilities and becomes most important to the story. Impressively, the skill of the authors is that you can feel the back story without it really being necessary to enjoy this one. So we find this odd band stuck on the planet Makahomia which turns out to be the home world of Nadhari who is one of Acorna’s companions. Makahomia is strictly kept at a quite primitive level of technology so as not to ‘contaminate’ their culture. Macostut, the commander of the local Federation outpost, goes to great lengths to enforce this.

Nadhari is sister to the currently ascendant ruler Mulzar Kando and Acorna assumes the title of ambassador for her people. So they are received with honours and are treated initially with great respect. Acorna soon learns that the scared guardians of all the temples are large cats much like RK and so requests to visit the temples. At this point, the local priests inform Acorna that the cats are all sick and are unlikely to survive much longer. How lucky that a visiting magic unicorn girl with tremendous healings powers is on hand! Of course, the sickness turns out to be underhand and many characters are far more than what they seem. So Acorna, Nadhari, RK and the others soon find themselves embroiled in battling a nefarious plot to kill all the guardians and progress the technology level of the planet by flouting the Federation’s rules.

One observation is that this book is very accommodating to the feminine viewpoint. All the female characters turn out to be strong leader-types in the end and, to be honest, all the males are rather non-threatening. Even the main protagonist struggles to seem suitably ominous. All this can be quite refreshing but it tends to go hand-in-hand with other various conceits such as everyone loving cats and no-one ever gets fed up with each other. None of the characters actually seem to have antagonistic traits at all! Ah, sweet harmony. This all seems to click for the hordes of fans as the same effect runs through most of McCaffrey’s writings.

But it can feel strangely artificial after a while as if the reader is waiting for the other shoe to drop but it never does. In many ways, it is an ultimate fantasy in that McCaffrey presents worlds where we can be safe forever without having to worry about any other nasty person coming and ruining it for us. No wonder McCaffrey is so popular.

Another part of why McCaffrey’s writings are so delectable is the just-so characters. For example, Acorna’s telepathic ability is extremely convenient. She broadcasts what she wants to who she wants and only picks up on their thoughts if they want. What the Belcerebons would not have given for that! Acorna never picks up on stray thoughts, never gets overwhelmed by the constant barrage of thoughts from other people and certainly never accidentally broadcasts anything she would rather not. Most of the book is written in the first person and, to be honest, you get the feeling Acorna is so holier-than-thou that she doesn’t actually ever have thoughts she would be embarrassed to broadcast.

Therein lies the rub as Acorna is practically perfect. So is Nadhari. As well as RK. Indeed all of the good characters. In fact, even the antagonists can’t bring themselves to be entirely evil and, as such, are actually fairly ineffective which rather robs the book of any sense of peril. I must admit that I never really felt that Acorna would not succeed in her quest.

This tends to mean that the story is very comfortable and not challenging at all. The reader rather trips through the book a bit like a dream enjoying the various delightful and well-rounded characters and then it ends. Much like a dream, it can sometimes be hard to remember the reading. Such is the stream-of-consciousness like progress. Of course, this is much like McCaffrey’s other writings so, if you have encountered this before, you will know what I am talking about. The thing is that this is very enjoyable. As noted above, once you start you just can’t stop and when you do get to the end it is hard not to feel disappointed.

In reviewing this book, I find myself a bit frustrated. It is hard to criticise it for being too nice. If you actually want a challenging read that you will remember well then don’t pick this up! However, if you are one of the many, many fans of McCaffrey’s writings then rest assured as this is more of the same. You are in safe hands here. If you have never tried these authors, then I do recommend to dip in a toe to see if it clicks with you. Maybe start at the beginning of a series, though. 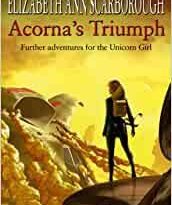