Up until the mid-1980s, I had only seen two 3D films at the cinema. The Mask (1961) in the early 70s and ‘Parasite’ (1982) much later, both low budget horror films. Reading the list author Ray Zone supplies with his book ‘3D Revolution: The History Of Modern Stereoscopic Cinema’, I have seen a lot more of them than I realised, alas not in 3D. It’s also a mistake to say that the 3D films budget went on the camera process because some thirty-three feature films and twenty shorts, some of which were cartoon, were created by the process right across the genre in the 1950s. Considering that our genre films, Science Fiction and horror, still only had B status, it’s amazing that they were allowed to have the process. However, don’t forget that three of them, ‘The House Of Wax’, ‘The Creature From The Black Lagoon’ and ‘It Came From Outer Space’ are regarded as classics and ‘Robot Monster’ as so bad it’s worth the cat-calls, so our genre wasn’t ignored. The first 3D film was actually ‘Bwana Devil’ (1953) and the aforementioned ‘The House Of Wax’ in 1955, the second. The effect was to dimensionalise the depth of vision far more than to throw things out at the audience, although reading this book indicates that this ended up being a key selling point by the cinema bosses.

Author Ray Zone goes into great detail explaining how two cameras were lined up to create the stereo vision as well as some of the limitations. Foremost of these was having to get the cameras a lot closer to the actors with a lot more light. If you wonder how you got to see these 3D films in 2D, then they just relied on the material from one of these cameras. When there was damage to the film, they would double print from the other camera. When you hear about modern films being suddenly made into 3D today, I suspect the same process is still used today. Indeed, when Zone goes into modern 3D films and their move into digital, the process hasn’t changed, just got more refined.

In modern times, it was ‘Friday The 13th Part III’ (1983) that resurrected the interest in 3D. The novelty grips viewers for a while before figures drop off. From what Zone says, most cinema projectors don’t have to have any major modification other than use elaborate lenses.

Don’t think this book is all about early 3D films as the last two-thirds of the book move up to modern day. Arrivision even tried 4D, adding smells to the mix although they didn’t take into account other smells in the theatre and their combining to a stench. A wry thought about doing a 3D film on sewage did spring to my mind.

Looking back to the 90s, it’s hardly surprising that there were a lot of 3D feature films about, especially as all it took to show in cinemas was a different type of lens, and many of them in our genre. That’s quite a marked difference to the 1950s but the budgets are different and budgets for our genre better. Jim Cameron’s ‘Avatar’ set the standard in 2007, combining CGI and 3D and although I didn’t see it in the cinema, pumped through a plasma TV, I at least saw the effect of its depth levels. Check the resolution of your own TV sets, cinema mode seems to do that.

IMAX made the biggest developments in 3D, mostly in non-dramas although they aren’t just restricted to the cinema and is often used in rides at the studios and elsewhere to give them that added oomph! To get their kind of immersion, though, the cinema had to be built for the viewer. An important lesson is, especially if you’re older, is to sit way back in the cinema than close-up if you want to avoid eye strain. Of particular importance is the filming in space with the building of the International Space Station in 1998. Reading how this one and ‘T-Rex: Back To Cretaceous’ (1998) will make many of you eager to see them in a cinema.

Ray Zone interviews a lot of the key people involved with 3D films in this book, making this book a definitive volume and reference book on the subject. He keeps a lot of things grounded by revealing cost against profit which is a financial eye-opener. 3D films fall vastly short of profit compared to 2D films, although I suspect as they can’t be sold for home viewing in that format doesn’t help matters. Many in the industry think 3D is the way forward although that depends on the viewers taste for it to prove it isn’t a fad.

Sadly, as reported in TwoMorrows publication Alter-Ego # 115, Ray Zone died in 2012. As such this is his final book on 3D films. If you’ve enjoyed 3D films, then this is a must buy book. It tells you all the history, warts and all, and explains the techniques to how 3D films are made that you’ll appreciate them more. Watch what they throw at you. 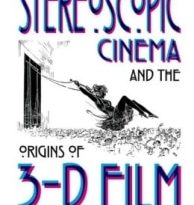