The latest weekly instalment of Thrill Power is out now in 2000AD Prog 2076. 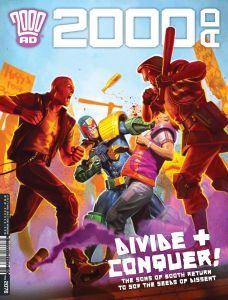 ‘Judge Dredd: Flaws’ (Part One) opens the issue. Higson Plaza is a divided community with one block supporting law enforcement and the other block bitterly resenting them. Sometimes, they fight. Reporter Mo Malik is more interested in a good story than keeping the peace and the Sons of Booth, an extremist group, are out to make the trouble worse. The script is by T.C. Eglington and the crisp, clean, detailed linear excellent art is by Staz Johnson.

‘Sinister Dexter: The Devil Don’t Care’ (Part Two) has the team of Dan Abnett and Steve Yeowell. Those ‘funting funtbag funts’ Sinister and Dexter are trying to save Billinomates, even though she put out a contract on them. I fancy Yeowell’s art was somewhat rushed this episode as there was much empty space and big figures. There may have been a deadline pressing.

Judge Anderson was one of my favourite ‘2000AD’ strips in bygone years but, with this story, ‘Undertow’ (Part Four)’’ , I don’t have a clue what’s going on. It’s the nature of characters with a large back catalogue that you lose track of their history and supporting cast.

In contrast, the ‘Strontium Dog: The Son’ (Part Four) story is easy to follow, despite my lack of knowledge. Johnny Alpha has gone in search of fugitives called Glazers. These are not people who fix your window but cold killers with a large bounty on each of their transparent heads. The script is by old hand John Wagner and the art by veteran Carlos Ezquerra. I think this story about Johnny teaming up with the son of an old comrade is more attractive than some of the pyrotechnic fare because it’s human and personal.

Not bad overall. I love the art but I may be too old for ‘2000AD’ stories. I’ll give it a few more issues and see how I feel. 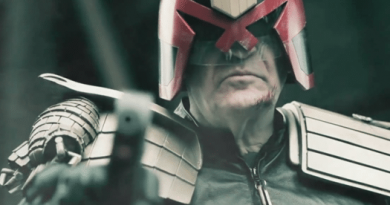 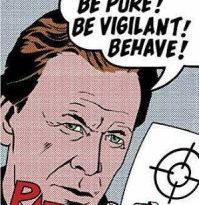 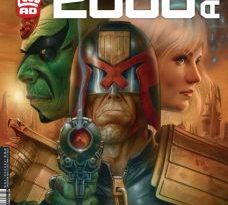