Much like the Prisoner, I live in a world where everything is uncertain and despite thinking I had written this review, it turned out to be a fantasy. The basis of the world of ‘The Prisoner’ is not being able to trust your eyes, ears and senses so an audio version is the ideal medium to get stuck into. Once again there are four episodes coming in at hour each. You won’t believe your ears. I think that’s the point. The Prisoner (Mark Elstob) has escaped from the Village. Waking up and finding it deserted, he has got as far as London. He finds his old house and even his old car occupied by a lady writer. (I’m tempted to say paperback writer as this is the 60s).

Having suffered a loss herself Kate Butterworth (Lucy Briggs-Owen) is sympathetic and offers to let him stay much to the disgust of her housekeeper. Number Six is determined to see his former employees perhaps for an explanation but will he like what he finds?

As an introduction to the distorted world of the Village and its mysterious bosses what is better than taking us away from that environment and landing us in the village of London? It’s a strange and isolating place where help and sympathy are far away.

On the day after his birthday, Number Six meets a familiar face and decides to go on a hunger strike. Trusting no one, he abstains completely from anything the Village can provide. What follow can either be a result of serious hunger or induced paranoia. The Village medical expert gives his opinion and the new Number Two invites Number Six over for a chat. When he doesn’t bite, she decides it might be quicker to use Rover to kill him. Which would make the series rather shorter. Instead, it’s the dieter’s torture on offer as she offers a banquet to break his fast. I think I’d take Rover over that.

This episode is a genius retranslation of the original TV story of severe psychological torture which for once Number Six is not on the receiving end of. Number Six sets out to eliminate the current Number Two. We don’t really know this at first but, gradually and insidiously, he infiltrates not only the loyalty of one of the clones but also gets into the head of Number Two. The key is to convince Number Two that he, Number Six, is not only a plant but also might just be Number One. The method and enactment is a subtle but clever change from the original which involved several long playing records and is perfect for audio.

In a very strange twist, Number Six goes out of this world. Reunited with Number Ninety or Number Nine, Number Six is reluctant to believe in this new reality. He’s going to the Moon but he just doesn’t want to accept the truth. After some in-flight sabotage, Number Six and his companion, whoever she is, find themselves on a moonbase called Harmony. It’s very ‘Space 1999’. We and he are all at Sea, the Sea of Non-Tranquility in this case. New characters and situations arise and this episode concludes Volume Two emphatically.

This episode also ties in beautifully with the conspiracies theories that suggest no one ever got to the Moon in the 1960s, especially as we’ve never been back.

‘Living In Harmony’ shares only the title of the TV series Briggs has reinvented it with great style as a Moon-based break. Bordering on the slightly crazed quite often, we are still not sure at the end whether Number Six really did go to the Moon. Maybe those conspiracists are right after all.

According to Nicholas Briggs, by way of ‘The Prisoner’, ‘there’s no logic to this’ and that’s much of the beauty of this as an audio. The inside information is presented as a commentary by Briggs, who both writes and directs the series. He also adds in comments from the cast and other ideas about how the series has been adapted and enhanced. Everyone who takes part has their own theories about what is actually happening! It’s truly a bonus to get this which brings out some of the subtleties and encourages a re-listen. Not that I needed encouraging.

This series has reignited my interest in ‘The Prisoner’. It might seem odd that a series that recently celebrated its 50th birthday could do this. The unspoilt location of Portmeirion continues to draw in fans and ‘The Prisoner’ increases its hold in a world where the paranoia of constant surveillance and hacking of lives only increases. The themes aside which remain current, the drama and the questions it raises are intriguing and compelling. I’m looking forward to the next even as I press play again on this volume. Be seeing you. 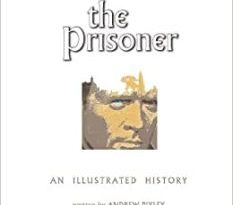 The Prisoner: An Illustrated History by Andrew Pixley (book review).

The Prisoner: An Illustrated History by Andrew Pixley (book review).